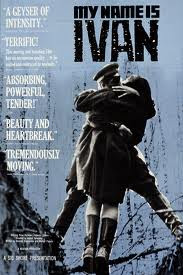 People who stumble across my writing on this blog have had two reactions to me: 1: “Charles Cassady? You’re still alive?” And 2: “You don’t like Andrei Tarkovsky? What are you, un-American?” Okay, sorry, on both counts. In the latter case, much as there’s the mandate to be world-cinema-alt/foreign-University-Circle-pseudo-intellectual dressed-all-in-black pretentious, I just can’t get enthused about the late Russian filmmaker (1932-1986) and his extraordinarily long-winded philosophical musings and endless camera takes. Don’t get me wrong, some of his material I rather enjoyed (THE MIRROR, especially), but most of the time I feel like the Communist Party officials who must have watched his SOLARIS readied for the international film-festival circuit in 1972 and said to each other, “We’re sending THIS as the Proletarian’s response up against decadent Kubrick’s 2001 – A SPACE ODYSSEY? Comrades, our system is doomed. Ronald Reagan could beat us!”

MY NAME IS IVAN, alias IVAN’S CHILDHOOD, from 1962, was Tarkovsky’s debut feature and I have to say it’s got the best and the (in my view) not-so-best qualities of the filmmaker, all combined in one elegant package. A tale of the Great Patriotic War (based on a short story by Vladimir Bogomolov with which I have no familiarity), it’s a tragic battlefield drama rendered in what would become Tarkovsky’s characteristic style - long, formal shots of verbose, introspective characters defined by their environments, in this case the bare winter forests and stripped ruins of the embattled USSR during WWII.

The title character is little Ivan, a Russian war orphan who insists on going on recon missions to spy on Nazi troop movements, despite ever-increasing risk. There’s the theory that German’s will be less likely to catch a small boy, or that they would at least go easy on him if they do, but few of Ivan’s Red Army friends really believe that.

Two Russian officers, a male and a female (in an incipient chaste romance) worry about Ivan’s future in a sort of surrogate-parent mode, and think that the boy has done his great patriotic duty and should now retire to a “normal” childhood. However the self-possessed Ivan maintains that his childhood was destroyed forevermore by war, and going on dangerous missions is pretty much all he has left.

A lot of this takes place in the form of slow-pan and slow-zoom conversations, poetically filmed and framed by the vertical elements of black tree trunks and white snow – interesting the first dozen times, but verging on watching paint dry in the long run, though not as much so, for me, as Tarkovsky’s later work.  I can see how this film, along with earlier classic BALLAD OF A SOLDIER, presented a kinder PR face of Kruschev’s post-Stalinist Soviet Union at international film festivals, as its melancholy messages of wartime sacrifice and waste could be applied universally to both Warsaw Pact and NATO audiences. Still, I could also see how Kremlin culture-ministers would also approve Ivan’s fatalism as the message (as in ALEXANDER NEVSKY) that the highest calling for Russians is to kill! Kill! Die!  die! for the Motherland. Lest Romney voters and Glenn Beck listeners think the nasty atheist Commies were alone in this attitude, one could dig a bit and find a few American propaganda flicks from the Cold War period on much the same level, but seldom were those made with Tarkovsky’s artful eye.

Ivan is portrayed by Nikolai Petrovich Burlayev, who I (more exactly, Wikipedia) am given to understand went on to an illustrious career as an adult actor-filmmakers, no shock-horror-Lindsay-Lohan scandals. So the Russkies whipped us in the former-child-star cold war, anyway.

It also may be worth mentioning that in Russian culture the name `Ivan’ comes loaded with folk-cultural baggage, as a sort of archetypal ever-resourceful village boy hero, kind of a Tom Sawyer, Eastern Europe-style, I guess. Or am I just trying to suck up to Cleveland Film Commission chief Ivan Schwartz, to whom I’ve sent a job application now and then? Yes, probably. Things are pretty bad now in the capitalist Free World. The old Soviet Union at least promised 100 per cent employment - though half of that turned out to be gulag administration and residency. Sigh. (2 1/2 out of 4 stars.)