[ "La Jetee" and MY LIFE TO LIVE screen Saturday September 22nd at 5 pm and Sunday September 23rd at 8:50 pm at the Cleveland Cinematheque.] 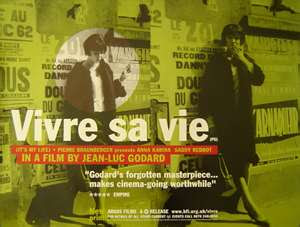 The Cleveland Cinematheque has double-teamed these two French alt-cinema classics from 50 years ago, apparently to prove that, way back in 1962, avid moviegoers had much more to choose from than CGI-heavy-superhero-comic-book adaptations or CGI-heavy-horror-sequel-reboot-remakes. Oh, and offscreen there existed a widely admired President Kennedy, good jobs and a strong economy. Even in Cleveland. So I've been told. Strange concepts indeed.

Divided into 12 "acts," Jean-Luc Godard's feature MY LIFE TO LIVE, known in the original language as VIVRE SA VIE, seems to fall between the aisles as character-study drama, social document on the corrosive effects of prostitution, and a rather tongue-in-cheek takeoff on literary themes (especially Emil Zola's novel Nana). Danish actress Anna Karina, who was, reality-TV briefly, the sexy wife and muse of Jean-Luc Godard, stars as `Nana,' a runaway young wife and mother. Bored with domesticity and determined to be a "star," Nana deserts her husband and child and flirts briefly with film acting and auditions, before beginning a no-apologies downward spiral. She works as a record-store clerk (audiophiles, prepare for multiple vinylgasms at the décor of the old-school album shop) and, finally, as a big-city whore/madame and small-time mob moll.

Some eccentric scenes consist solely of the backs of characters' heads as they converse, and there is the mild suspicion that the French New Wave stylist Godard is putting a big joke over on the viewer. That tends to undermine what the film retains of serious intent, showing a heroine running out of options and forced to the streets, much as it's her no-regrets proto-feminist "choice." Hey, come to think of it, Lindsay Lohan would be apt casting for the doomed, empowered heroine in any terrible remake. Are you with me in that, Musketeers?

In an extension of his celebrated guerilla filmmaking techniques of his early career, Godard shot while recording the sound naturally, refusing a studio audio mix in post-production. Or maybe he was just saving up money for the alimony he'd need after he split from the Danish dish. Damn filmmakers, always hard to tell

MY LIFE TO LIVE is being shown along with the groundbreaking "La Jetee" of Chris Marker. Speaking of remakes, it's one of those cruel cinema ironies that Marker, a world-class filmmaker and documentarian, is best known for a movie he didn't make, 12 MONKEYS, Terry Gilliam's popular time-travel opus. As fun as Gilliam's take was, it still bows before the short subject that inspired it, Marker's `film,' which is really something else completely.

Built entirely of B&W still photographs with a voiceover narrator, "La Jetee" tells the Twilight Zone-ish tale of a post-WWIII time-traveler, thrust back into his own past, via a particularly strong memory association with an incident at an airport, on a mission to change history. He ends up (or begins?) appealing to time-travelers from his future to help him out of a pretzel-logic paradox that results.

Even today it's easy to see why the non-motion picture was a revelation on the festival circuit, even with the flagrant omission of Bruce Willis, Brad Pitt or anything resembling conventional f/x. Watching and trying to think the Moebius-strip storyline through is still a transfixing, extra-temporal experience. Chris Marker died this year at 91. Wow, a lot of exceptional people from our lives seem to be dying this year. Soon Lindsay Lohan may be the only performing artist left; better get used to her. (3 1/2 out of 4 stars)