Hara-Kiri: Death of a Samurai (September 18th at the Capitol Theatre)

[HARA-KIRI: DEATH OF A SAMURAI screens Tuesday September 18th at 7:00 pm at the Capitol Theatre in association with The Cleveland Cinematheque.] 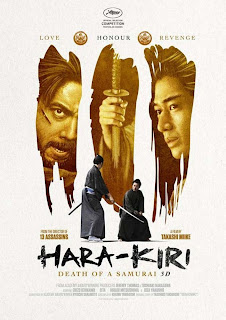 Japanese culture places considerable emphasis on the idea of honor. On the surface, that seems like a worthy trait to value, but in HARA-KIRI: DEATH OF A SAMURAI, prolific filmmaker Takashi Miike takes a look at the negative side of putting honor (or at least the appearance of honor) above all else.

The film takes place during the early 1600s in Japan, a time of relative peace when many samurai warriors have fallen on hard times, their services no longer being needed. One such samurai is Hanshirô Tsugumo (Ebizyô Ichikawa). Rather than endure the life of a masterless samurai, or ronin, Hanshirô presents himself at the estate of the Ii clan, asking permission to commit ritual suicide and thus regain some of his honor.


While his request is not denied, Hanshirô is first informed by the manager of the estate, Kageyu (Kôji Yakusho), that they will not tolerate any “suicide bluffs” of the sort that are apparently rampant at this time. These are cases in which samurai claim they want to commit suicide as a means of extorting money or favors out of pity. Kageyu then goes on to tell Hanshirô what happened to the last samurai who tried to use such tactics on his clan. Much in this initial set up is not what it seems.

There isn't a whole lot of action in this film despite the samurai milieu. What violence we are shown, however, is presented in such a way as to have real impact. That makes it all the more odd that Miike would have chosen to have this film released in 3D. I saw it in 2D on a DVD screener, but I can't imagine a single shot in the film that would have benefited from the added dimension, or even made for a fun gimmicky moment.

This also happens to be a remake of a classic of Japanese cinema, the 1962 HARAKIRI. I haven't seen that earlier version so I can't compare the two. All I can say is that Miike's film, while interesting, isn't likely to go down in history as a “must-see”. 2 1/2 out of 4 stars.
Posted by Bob Ignizio at 12:32 AM