[FINDING NEMO opens this Friday in a new 3D version. This review applies to the film in it's 2D presentation. Since the only difference is now you get to pay a few bucks more to wear cheap plastic glasses, we feel the review still applies.] 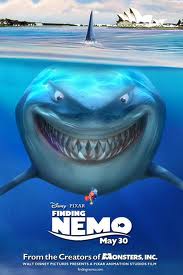 I have a drinking game for you all to try at the newly-opened-who-wouldn't-hire-me Cleveland Aquarium. Locate the tank that contains the common saltwater species the clownfish and the blue tang. Wait for kids to come along, and every time some tot excitedly points the animals out and says "Nemo!" or "Dory!" take a shot. Any spirits beverage of your choice, including 3.2 beer. You'll be smashed within minutes. Within an hour, liable to be life-flighted for alcohol poisoning. (This drinking game also applies to the fish exhibit at the also-who-wouldn't-hire-me-Cleveland Metroparks Zoo, but the Cleveland Aquarium was built in the Flats, where superhuman public intoxication raises fewer eyebrows.)

Dory and Nemo, of course, are kiddie-fave characters in FINDING NEMO, the 2003 icthyic fantasy from the digital magicians at Pixar, whose fertile imaginings generated such previous hits as TOY STORY, MONSTERS INC. and A BUG'S LIFE, all sprightly, thoughtful, eye-filling and inventive all-ages whimsies that hark back to the days when Walt Disney's signature on a flick guaranteed a good time for parents and children alike. Even buying the inevitable plastic-injection-molded Buzz Lightyear made-in-China action figure became a ritual less onerous for the rich pleasure the films provided.

FINDING NEMO isn't a top-of-the-line catch in Pixar's nets, but it measures up. Its running time of 101 minutes, uncommonly long for the G-rated crowd, goes by swimmingly. Main problem is a formulaic kiddie-entertainment premise that stoops to the perennial Disney (and wannabe-Disney) opening gambit - joining the Dead Parent Society. Setting is the Great Barrier Reef of Australia, brought to full bloom via computer graphics. No sooner do we see blissful middle-class clownfish Marlin (voiced by Albert Brooks) and his finny spouse contemplate their brood of eggs than an offscreen barracuda attack leaves Marlin a widower and single-dadfish, nervously protective of one surviving egg.

The egg grows into Nemo (voiced by Alexander Gould) a small fry hindered by a gimpy fin - so not only motherless but lame, got the pathos folks? - but determined to prove himself by going to "school" like all the other offspring of reef denizens. Taking adar to swim beyond the reef drop-off to open water, Nemo gets scooped by a scuba diver and taken to to reside in a saltwater aquarium in a dental office. The frantic Marlin swims after, far outside his comfort zone, through an ocean and coastline teeming with predators, on a seemingly hopeless quest to get Nemo back.

Marlin hooks up with the addled Dory (voiced by Ellen DeGeneres), a friendly fish who suffers from short-term memory loss and can barely keep a thought in her head. Unlike Guy Pearce in MEMENTO, she's a chipper, oblivious nutcase who charges wide-eyed and optimistic into even the most dangerous of shoals. It is a wonderful characterization, even more so set beside Brooks' neurotic Marlin.

There do seem to be a lot of issue-ridden CGI cast members in FINDING NEMO. Besides the brain-damaged Dory, a couple of 12-step-program sharks lurk, and Nemo shares his prison with a tankful of stir-crazy captive fish, leader of which is the scarred, bitter Gill (voiced by Willem Dafoe), whose escape attempts are, relievedly, not reflective of WWII POW flicks (the stop-motion CHICKEN RUN mined that territory effectively). Some scattered satire plays well to grownups even as it goes over kids' heads.

Whether Nemo is found or not is as predictable a conclusion as what happens to the orca in FREE WILLY, and writer-director Andrew Stanton - who voice-cameos as a surfer-dude sea turtle - strains credulity at times even in a whopper of a tale like this. Why should some fish-eating shore birds, pelicans, join the trans-species rescue effort while others, gulls, still seek to mindlessly gulp down our heroes. Oh forget it (Dory already did), disarm your cynicism and have a good time.

And try to overlook that when you do a Google search on FINDING NEMO now it autofills for FINDING NEMO 2. OhHellNo! Now there's something to get stinking drunk over. In a little over a dozen years of rendering movie magic, Pixar is now sequelling everything they ever did. Disney pen-and-ink animators, at least, had a good run for about 50 years before they started spewing the PETER PAN and BAMBI followups into the direct-to-video trout pond. Can a crossover between FINDING NEMO and the tapped-out SHREK franchise far behind? At least come up with a more original title. Maybe...FINDING NEMO JUMPS THE SHARK TALE? (3 out of 4 stars)
Posted by Charles Cassady Jr. at 12:01 AM