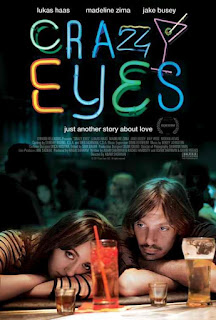 Apparently the Goodyear Tire & Rubber Company got some publicity (and reminded people that they're still in business) by publicly inviting at-risk/chemically impaired starlets Lindsay Lohan and Amanda Bynes over here for driving lessons. Aww, they probably just want to launch a cable sitcom with the ladies called "Hot in Akron." Either that or NE Ohio is one place where the drinking is so all pervasive that you could actually be pulled over for insufficient blood-alcohol count; therefore showbiz folk would be safe. I've pondered that sometimes, coming home white-knuckled from my night jobs. Dr. Bob and Bill W, yeah, sure, right.

Ms. Bynes or Ms. Lohan might have purchased some much-needed goodwill and a pint of artistic integrity via appearing in CRAZY EYES, an indie which, despite upscale environments, has a tone not unlike the lowlife addiction-fiction of Charles Bukowski (inspiration for BARFLY) and Hubert Selby Jr. (inspiration for LAST EXIT TO BROOKLYN and REQUIEM FOR A DREAM).

Co-writer and director Adam Sherman - through the voice of his stand-in, star Lukas Haas - says at the outset that his bluesy LA story is mostly true and autobiographical, and one should ignore any legal disclaimers. That's kind of gutsy, considering what follows. Zach (Haas) is a young, divorced, Los Angeles alcoholic with lots of money, apparently handouts from his ever-adoring and probably-would-vote-for-Romney straitlaced parents. Zach has a listless routine of bicoastal sexual conquests and pub crawls/fights alongside his drinking buddies. The only things that seem to engage him are the custodial visits with his small son.

Then Zach meets Rebecca (Madeline Zima), whom he nicknames `Crazy Eyes.' She's a vaguely boho-girl bar-hopper who, pleading other boyfriends/relationships and alibis, refuses to have sex with Zach, even as she gets smashed and sleeps naked by his side regularly. Zach finds her fascinating. Yet he still grabs a one-night stand when he can, and he goes on with everything short of date rape - they joke about it - to have carnal knowledge of Rebecca.

Will their relationship still endure if/when they go all the way? Will Zach's pathologies make him lose all contact with his boy? How come non-drinker Charles Cassady couldn't get a date to save his life, while females always throw themselves at passed-out-in-their-own-puke creeps like Zach? Okay, that last question goes unanswered by this narrative. Maybe in the Director's Cut.

Note lots and lots of ever-so-symbolic camera angles of the characters seen through transparent cups and liquor bottles. Haas and Sherman do find shot-glasses of humanity in the self-loathing and oft-loathsome Zach, though probably too few for some viewers' tastes. Leading-lady Madeline Zima alone has more vomiting scenes for one character than I can remember since on-camera upchucking became a dramatic keystone of the 1990s (thank you, CRYING GAME). Some well-known character actors also turn in nice supporting bits, including Jake Busey, all too often given one-note monster roles like his talented father Gary. Good to see them getting into what was obviously a non-genre, non-formulaic project. Viewer Advisory: despite all the discussions about sex and displays of skimpy lingerie, actual nudity and graphic intercourse is brief or withheld. Appropriately enough.

Press material with Sherman claims the filmmaker and his real-life `Crazy Eyes' (whose name escapes me, but it wasn't Nora Ephron or Nancy Myers - or Lindsay Lohan or Amanda Bynes) pretty much wrote the script as they lived it, day to day, night to boozing night. Yes, movie people are magical. And some think that having more of them around here will uplift the economy. Well, maybe in Warehouse District niteclubs and Flats saloons. (2 3/4 out of 4 stars).
Posted by Charles Cassady Jr. at 12:01 AM