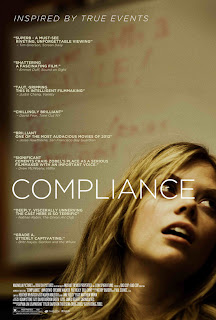 For most viewers, there will come a point in COMPLIANCE at which they feel what they are seeing couldn't possibly happen in real life. Surely no one in their right mind would go along with what the prank caller in the film, impersonating a police officer, tells a restaurant manager and others to do to an employee the caller has said is guilty of theft. Surely, as with most films that claim to be “based on a true story”, the filmmakers must be exaggerating for dramatic effect. They aren't. The names and locations have been changed, but the events depicted in COMPLIANCE are identical to what happened at a Kentucky McDonald's in 2004. And lest you think that was an isolated incident, 70 similar cases took place over the prior decade.

The film takes place on a busy Friday night at the fictitious Chickwich restaurant. It's already been a bad day for manager Sandra (Ann Dowd) – someone left the freezer door open the previous night, ruining some of the store's supplies, and one of her employees has called off sick. Still, Sandra and her crew keep things going as best they can. Then the phone rings. A man claiming to be a police officer tells Sandra that counter girl Becky (Dreama Walker) stole money from a customer's purse. He needs Sandra to take the girl back to her office and search her. Despite protestations of innocence, Becky agrees, figuring it will all be over soon. It won't, and from here on things just keep getting progressively more disturbing and unbelievable.

It might seem as if writer/director Craig Zobel's script would work just as well as a stage play, but that's not the case. The way the film is shot adds a great deal to its overall tone. Zobel uses a lot of close-ups, generating a feeling of claustrophobia and driving home the way his characters are unable to see beyond themselves and their immediate situation. Zobel also does a great job getting the mundane details right; anyone who has ever done time in fast food Hell to make ends meet should find the personalities, conversations, and general operations of the Chickwich restaurant quite familiar.

Given the resistance many have to accepting Zobel's premise, having a strong, believable cast is crucial. Although in her mid twenties, Walker makes for a very convincing teen. She starts out with a sort of snarky, mildly annoyed bravado which is then chipped away, bit by bit, over the course of the film. As for Dowd, her performance absolutely sells the idea that her character would go along with what she's told without being stupid or a “bad” person.

We're taught from an early age to respect and obey authority figures like police officers to the point that it's an almost unconscious response for some. We all like to think that we'd act differently in a situation like the one in this movie, but how do we really know? It's that fear and self doubt that COMPLIANCE plays on very effectively. So effectively that some audience members have walked out of screenings. Even though Zobel shows a great deal of restraint, never allowing his film to slip into exploitation, his basic premise is just too unsettling for some. As an examination of the dark side of the ways humans react to perceived authority, the film is just about perfect, but if you're looking to be entertained in the traditional sense, this probably isn't for you. 3 1/2 out of 4 stars.