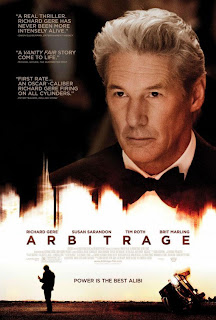 The complexities of high finance generally do not make for compelling cinema. That may be why we haven't seen, for instance, The Ivan Boesky Story or The Trials of Bernie Madoff. The subject may just be too complicated for the relatively simple film medium. I wondered, then, about the title of Nicholas Jarecki's ARBITRAGE which suggests a drama about risk arbitrage, the 1980s insider-trading scheme, symbolized by the swashbuckling Boesky, in which traders would buy stock in a company likely to be acquired in a merger and simultaneously sell stock in its potential acquirer.

The title, it turns out, is misleading. There is arbitrage in ARBITRAGE , but it's the less sexy kind involving commodities futures. And, it is but a small detail in a glossy morality play about a rich man who thinks he can buy and sell people.

Writer-director Jarecki is one of three filmmaking brothers. Like his brothers, Eugene (WHY WE FIGHT) and Andrew (CAPTURING THE FRIEDMANS), 25-year-old Nicholas has made documentaries, but unlike the Jareckis frere, Nicholas' interests seem to lie in traditional storytelling rather than examining social and political issues. ARBITRAGE is a very traditional, linear drama, a throwback to an earlier style of moviemaking, with '80s stars Gere and Sarandon. (The appearance of the great Stuart Margolin, as Robert's lawyer, gave me a frisson of '70s Rockford Files nostalgia, too.)

The centerpiece of the story is Robert Miller (Richard Gere), a hedge fund manager worried about the impending sale of his trading empire, which is teetering because of a bad investment he made in copper mines. On the surface, Robert's life is privileged and serene – Yorick Le Saux's gleaming nocturnal cinematography casts an enviable glow on Robert's tony Manhattan apartment, where he gathers to celebrate his sixtieth birthday with his friends and family, which includes wife Ellen (Susan Sarandon) and daughter Brooke (Brit Marling), who is chief financial officer of her father's company. He's a darling of the financial media, a Forbes cover boy and a sought-after guest on CNBC.

Robert's life is quite civilized, but its glossy exterior conceals many secrets. Robert is having a torrid affair with a beautiful French art dealer (Laetitia Casta) he has stashed away in an apartment, and the prospective buyer of his company (played creditably by Vanity Fair editor Graydon Carter) seems reluctant to close the deal. Everything depends on the sale, because, unknown to Brooke or anyone else, Robert has borrowed a fortune he can't repay to cover his copper-mine losses. And Julie, his mistress, is getting restless, pressing Robert to leave his wife.

On a fateful night, the Mercedes Robert is driving is involved in a serious accident, and the film swerves from a story about business deals to a standard thriller and police procedural. Robert finds himself dodging questions by a suspicious police detective (Tim Roth) when his version of events that night doesn't add up. He's also evading questions from his daughter, who discovers that the company's books don't add up, and he's desperately pursuing a signature from the company's prospective buyer.

His business problems worry him far more than the fate of young Jimmy Grant (Nate Parker), son of his deceased protege. Robert calls Robert to pick him up after the crash, placing Jimmy in legal jeopardy. Jimmy's story, though a tad cliché, adds a racial component to Robert's selfish worldview. A struggling African-American young man, he is just collateral damage in the rich mogul's mission to save his foundering empire. Robert's wife, daughter and son-in-law, too, are just pawns on his chessboard.

Elements of the story are rather predictable (Sarandon, for example, is relegated to the relatively thankless wronged-wife role), but the script has a few tricks up its cufflinked sleeve. Conventional it may be, but it's handled with such impeccable style that it's a pleasure to watch. 3 out of 4 stars.