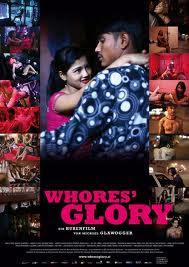 I confess that during my long, bleak bachelor years I often indulged in a quasi-imperialist romantic fantasy, the type inspired by too much reading Graham Greene and Somerset Maugham during dateless nights. That maybe if I hit 40 or 50 and still had no girlfriend, I might scrape together my savings, fly out to some Third World hellhole, and find a sweet-faced, desperate young prostitute. I'd ask her to come to America with me as a sort of mail-order bride. "Oh yes Yankee!" she'd say brightly. "Me wanna go America! Me be good wife, me love you longtime! Me just have to ask, what you do in career?" And when I told her, the almond eyes would narrow and she'd say, "Film critic? In Cleveland? Now me have second thought. There still Khmer Rouge here, they turn cannibal, live in jungle caves, make much better husband material. You leave now, Yankee Charles. No touch door knob on way out. We run clean place, no Cleveland film-critic germs!"

Yes, that pretty much sums my life up, but for a more in-depth look at Third-World prostitutes (now that Women's History Month is past), be at the Cinematheque for the documentary WHORE'S GLORY. It bids to go where, well, sure, Lots Of Men Have Gone Before, in a "triptych" behind the scenes with the ladies of the sex trade in Thailand, Bangladesh and Mexico City. In contrast to say, an exploitative vintage "Mondo" movie or an ill-lit piece of shaky-camera reportage brimming with feminist outrage, director Michael Glawogger's style is unusually, well, stylish, with saturated colors and intervals of Emily Dickinson poetry and heavy emo-Lilith Fair caterwauling (hope you like P.J. Harvey).

The prostitutes shown in Bangkok seem to have it best, all things considered, in a portrayal of sex-as-consumer-commodity run so efficiently even Mitt Romney wouldn't have much objection. Dutifully praying before work, they lapdance away in a spotless love emporium called the Fishtank. These girls are ever-smiling cheerful, anime-lovely, and immaculately groomed to western tastes, as johns select them by number, like meals, from a glassed-in display case, for massages and...other services. Meanwhile street dogs mate outside the entrance.

Their company employs a sort of madam to watch over them, and she says the girls look to her as a surrogate mother. Here Glawogger, as he does throughout the picture, interviews not only the concubines but also the customers. One businessman declares that none of his patronizing the Fishbowl beauties amounts to a betrayal of his wife. He loves her, they've been through everything together and this is just fun on the side, just a commercial transaction. The other Asian johns are also pretty realistic and pragmatic about the whole thing. Yep, I'd say the 21st century pretty much belongs to the orient. WOULD ONE HERE HAVE MARRIED CHARLES?: Only if my last name were "Sheen."

Things are more squalid in Faridpur, Bangladesh, in a district called the City of Joy (I thought that was in India; maybe they're franchising now). Here, amidst narrow streets, shacks and goats, we meet small subsistence brothels where the madam claims to be just as poor as her girls, who, unlike the giggly sisterhoods of Bangkok, get visibly insecure, jealous, petty and despairing. They also desperately try to maintain regular customers who come back to them again and again, perhaps to become serious boyfriends and providers. One of the girls, though, won't do oral sex, claiming it's against Allah's will. Throughout the pic I did wonder, especially in these more cloistered, non-western climes, how much of this stuff might have been grandstanding for the German-Austrian filmmaker cameras, especially the shockingly intimate stuff. WOULD ONE HERE HAVE MARRIED CHARLES?  Yes, I think so. But then Homeland Security would immediately arrest me for fraternizing with suspected terrorists, send me to Gitmo for waterboarding. My bride, Fatima bin Laden Death-to-America Jihad-Cassady, would stay here, having landed a fat government job because she satisfies so many of the ethnic-diversity quotas that are all the rage with HR Departments now.

Worst is saved for last, Mexico City. Something tells me a lot of University Circle kids (and perhaps faculty) already know the milieu, having gone there on many a Spring Break, but the megalopolis registers as a pretty nasty place, the prosties exceptionally brazen and ghetto-unsentimental, the johns seeming especially odious as they brag about their escapades and machismo. This happens to be the only segment with nudity (and nobody around here looks like Salma Hayek or Diego Luna, no matter what Quentin Tarentino or Robert Rodriguez may tell you), and there is even a sex act caught on camera. It's unsuccessful, mainly; The girl claims the kid ran out of money, but I can't help think that if the deal went off as planned it might have gotten this picture classed as porno.

There's a side detail, too, that in this, the only "Christian" setting, one Mexican whore worships an Angel of Death totem. Ah, this I did learn from another documentary recently, that thanks to Mexico City's endless drug wars and violence, Latinos have indeed created a "Santo Muerte" death figure to pray to - she's sort of the Madonna with a Skeletor makeover - who gets the job done in matters of personal protection and retribution. Yes, as if the Catholic Church doesn't have enough bad PR. This whole segment could be excerpted and shown to bolster the anti-immigration movement. Build that wall, string that razor wire across the Rio Grande, you betchya! WOULD ONE HERE HAVE MARRIED CHARLES?: Yes, but only to kidnap me and ransom me to my family, body parts sent through the mail, and all that.

Overall, if I had to choose, I'd favor the Fishtank. There's an amazing opening revelation, that the Bangkok harlots have green laser-pointers, and from their glassed-in brothel high above the street they "paint" boys walking below, trying to entice them to come upstairs. That would work for me! And I'd show up with a red laser and costumes and ask how much it would cost to crank up the smoke machine, so we could make some cool Sith-vs.-Jedi light-saber-duel videos to post online. That's when those formerly smiling Thai girls would at last break down in tears, cursing the Buddha for the depths of degradation to which they've sunk. No, none of them would marry me. (3 out of 4 stars)