[THINGS I DON'T UNDERSTAND is currently making the rounds of the film festival circuit.] 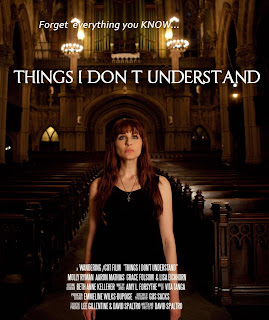 It's well shot and features some solid performances, but THINGS I DON'T UNDERSTAND is so cluttered and unfocused one has to wonder if even writer/director David Spaltro knows what it's supposed to be about. The film's protagonist Violet (Molly Ryman) explains in voice over that she's writing a paper on near death experiences, which are all so similar and so banal that she doesn't put much stock in them as proof of life after death. Maybe that's why she decides to see what lies beyond for herself by attempting suicide.

After Violet's recovery, the film switches gears. Half of the movie feels like a romantic comedy with Violet chasing after Parker (Aaron Matthias), the hunky and mysterious bartender who works downstairs from the loft she shares with a couple of quirky hipster roommates straight from central casting – gay punk rocker Remy (Hugo Dillon) and feminist performance artist Gaby (Meissa Hampton). The other half sees Violet, at the behest of her therapist, visiting Sara (Grace Folsom), a young woman dying of cancer at hospice. This is presumably as part of Violet's “near death experience” research paper, but since Sara hasn't gone through a near death experience, it's not clear how this would tie in.

If you were to watch one or two of the better scenes in this movie out of context, you might well think THINGS I DON'T UNDERSTAND looks a little rough around the edges, but interesting. Trying to watch the film from beginning to end, however, is an exercise in frustration. Just when you think the movie is moving forward with its plot, it goes off on some random tangent involving minor characters that in no way matters to any of the potential main narratives. A tighter edit would certainly have helped, but even then it's not clear if a cohesive, satisfying film would have emerged from the assortment of half finished ideas we have here. 2 out of 4 stars.

For more information visit https://www.facebook.com/THINGSIDONTUNDERSTAND.
Posted by Bob Ignizio at 12:01 AM