The Muppet Movie (August 5th at the Palace Theatre)

[THE MUPPET MOVIE screens Sunday August 5th at 2:00 pm at the Palace Theatre as part of Cinema at the Square.] 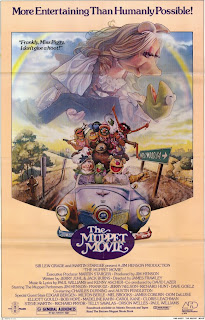 Kids these days have it rough, between cyber-bullying, broken homes, flesh-eating bath-salt zombies, psycho gun nuts at the movies who think they're comic-book villains, and a beckoning adulthood of bleak joblessness, One Nation Under Wall Street, and no talk of "hope" and "change" anymore. You want to stress young people out even further? Tell them that before The Muppet Show was a syndicated 1976-1981 TV smash, Jim Henson's creations had a brief run as part of the original Not Ready For Prime Time Players ensemble on Saturday Night Live. Yes, they did, right alongside John Belushi, , Gilda Radner etc. there were "Jim Henson's Muppets" in recurring bits. No, they weren't Kermit or Fozzie. They were originals - grotesque, reptilian creatures, similar to those later seen in THE DARK CRYSTAL. The SNL Muppets dwelt in some kind of primordial landscape of jungle ruins and commonly told off-color jokes about their sex lives. True story!

It seemed to be a short-lived comedy experiment, and the Muppets straightaway got a different offer, to have their own TV variety show in England. And, with the success of that, came 1979's THE MUPPET MOVIE.

Hard to believe now, but when THE MUPPET MOVIE opened, Paul Williams' charming songs were judged bland and forgettable by the era's overpaid film critics (who I guess expected Disco Muppets). In a classic zoom-in-opening, Kermit the Frog is in the swamp singing "The Rainbow Connection" wistfully to himself when he's overheard by a passing showbiz agent (Dom DeLuise), who compliments the amphibian on his talents. DeLuise is just one of a number of superstar gag cameos (Steve Martin, Richard Pryor, Orson Welles, Mel Brooks) throughout the picture.

Fired up by the thought of performing in , Kermit hits the road on a bicycle, heading westward and gathering along the way a menagerie of equally-ambitious Muppet animals. There's the painfully-unfunny standup comic Fozzie Bear, the unclassifiable Great Gonzo (determined in a much later Muppet movie to have been a space alien all along), the rock band Dr. Teeth and the Electric Mayhem (who are found performing in a deconsecrated church, which may be sly reference to Arlo Guthrie's song/film 'S RESTAURANT), and the feisty, narcissistic diva Miss Piggy, who immediately becomes infatuated with the go-getter frog.

But also after Kermit for less romantic reasons is a Colonel Sanders-type (Charles Durning) obsessed with turning Kermit into an mascot for his chain of frog-leg restaurants. The bad guy's cross-country pursuit sidetracks the Muppets, but eventually they arrive in and get signed to the standard "rich and famous" contract. So what we've seen here, then, is basically a prequel to the The Muppet Show showing how a group of misfit critters attained the status of putting on a weekly variety program.

As for THE MUPPET MOVIE, it was considered a technological breakthrough when it first came out. Imagine seeing puppets like Kermit and Fozzie no longer just waist-up but full-length, even riding a bicycle. The beauty is that the relatively low-tech magic, innocence and sweetness of Jim Henson's characters still hold up. It's wondrous how alive and likeable a piece of felt like Kermit can be with just a smirk or tilt of his fabric head. Grownups and kids have no trouble accepting the Muppets' interactions with humans or each other, even if the Kermit-crazed villain seems a weak afterthought. If anything's gone stale it's the jokes and puns, seemingly pitched at the younger end of the scale of the Muppets' global fandom.

Still, adults will have more than one occasion to smile, especially at the parade of celebrity appearances. The film is dedicated to two of them, whose vaudeville routines really helped pave the way for the Muppets: ventriloquist Edgar Bergen (father of Candice) and his dummy Charlie McCarthy. died not long after filming his cameo here - thus McCarthy died too. Incidentally, when Jim Henson died the ensemble decided to officially retire the Muppet which whom he most identified, Rowf the Dog, which is why you see Rowf here but not in recent outings like last years THE MUPPETS. In my personal opinion THE MUPPETS TAKE MANHATTAN remains the best of all the Muppet film escapades, though this one excels in the music department. (3 out of 4 stars)
Posted by Charles Cassady Jr. at 12:01 AM