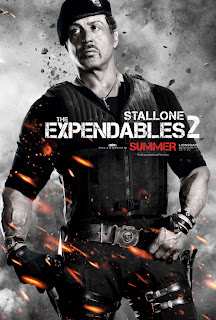 How many action heroes can you cram into one movie before it becomes a cluttered mess? It seemed as though that question had been answered by 2010's THE EXPENDABLES. That film had its moments, but far too often it felt rushed and confusing. So how then to explain the fact that THE EXPENDABLES 2 beefs up the roles for two stars who had only brief cameos last time, adds two more of the biggest names in action hero history to its cast, and even manages to give us a pair of new, younger heroes, and yet still manages to juggle all these stars and their respective egos far better while only losing one major cast member (Mickey Rourke) from the previous film?


For one thing, it feels like there's more of a real script this time out. Not much of one, mind you, but enough of an improvement to make a difference. Perhaps more importantly, that script makes the decision to focus on just a few characters. Barney Ross (Sylvester Stallone) and Lee Christmas (Jason Statham) are much more firmly the leads this time, with the rest of their band of mercenaries – Gunner (Dolph Lundgren), Yin (Jet Li), Hale Caesar (Terry Crews) and Toll Road (Randy Couture) – kept in the background, although everyone does get at least one moment to shine. Li actually exits the movie after the opening action sequence, allowing more development for new guy Billy (Liam Hemsworth) and Maggie (Nan Yu), a technical expert on loan from Church (Bruce Willis). And while they aren't part of the team, Church, Trench (Arnold Schwarzenegger) and a new character named Booker (Chuck Norris) all show up when it counts to offer an assist.

The villain in THE EXPENDABLES 2 is named Vilain, (no really, that's his name), a Satanic terrorist looking to get his hands on a huge stockpile of Soviet plutonium to sell to the highest bidder. This particularly despicable bad guy is played by none other than Jean Claude Van Damme, who in recent years has shown he's more than just the “muscles from Brussels” by taking on some interesting and risky roles, like playing a down-and-out version of himself in JCVD. A lot of actors known mainly for playing heroes would balk at being the bad guy for fear of tarnishing their image, but Van Damme goes for the gusto, turning in a performance that's arguably more memorable than any of his heroic turns.

So really, for the first two acts this is about as good a film of its kind as you could want. The characters feel balanced, there's a reasonable amount of self deprecating humor without crossing the line into self parody, and the action scenes are staged well (although I could do without the CGI blood – give me old fashioned squibs any day). The third act gets a little silly and puts too much emphasis on characters who probably should have been left as cameo appearances, but the climactic showdown between Stallone and Van Damme almost makes up for it.

The same criticisms that one could make about any typical 80's action film are just as valid here – it's right wing propaganda that glorifies violence, it's mindless trash, the acting is bad, etc. – but that never mattered much to me when I was watching movies like RAMBO, COMMANDO, or MISSING IN ACTION as a teenager, and it doesn't matter much to me now. Sometimes you just want to watch a movie where a whole lot of ass gets kicked, bad one liners get uttered, and there aren't any complicated shades of gray to get in the way of your enjoyment. 3 out of 4 stars.
Posted by Bob Ignizio at 12:01 AM