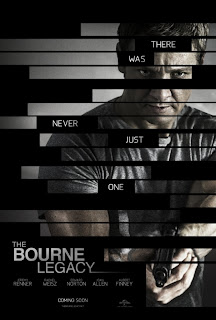 With series star Matt Damon taking a pass, in THE BOURNE LEGACY it's up to Jeremy Renner to pick up the torch as Aaron Cross/Kenneth Gibson, another super spy from the same program that created Damon's Jason Bourne. Cross winds up on the run from his CIA handlers when they decide to start cleaning house after the events of THE BOURNE ULTIMATUM, starting by killing all the agents in the program. Cross eventually teams up with Dr. Marta Shearling (Rachael Weisz), one of the scientists he routinely went to for monitoring who is herself targeted for elimination. Cross saves her from assassination, but in return asks for help in obtaining more of the drugs that keep him enhanced physically and mentally. From this set up, lots of ass kicking and high speed chases follow.

Series writer Tony Gilroy directs as well this time out, and he gives the film a very different look and feel from its predecessors. While the action is still fast paced, for the most part it's more coherent than in previous installments, the climactic motorcycle chase near the end being a notable exception. Gilroy's color choices also feel more natural, and he isn't afraid to slow down and take a breather for character and plot development now and then, giving his film a less frenetic pace. Tonally it's not that far off from Gilroy's Oscar nominated MICHAEL CLAYTON, just with more stunts and explosions.

Those are all fine choices that would seem to indicate an intent to set this film apart from the others, but then Gilroy's script seems to be bending over backwards to connect to the previous installments. There are several instances where events from ULTIMATUM are directly referenced to no real useful end, and in the absence of Damon many of the supporting cast members show up for what amounts to little more than glorified cameos. This baggage only serves to slow the film down and clutter what should be a fairly straight forward story.

Renner makes a fine action hero, and for my money is far more believable as such than Damon ever was. Although Weisz is a superb actress, her Dr. Shearling rarely gets to be anything more than a damsel in distress. In fact women in general get short changed in this film, especially compared to the previous films which all featured multiple prominent female characters. Finally, in the bad guy department Edward Norton just doesn't have the innate presence to give his blandly written antagonist any sense of threat.

Basically what we have here is B-movie Bourne. This is the point where most franchises would either give up or drop the budget and go straight to video. Yes, there is some top notch talent here both in front of and behind the cameras, but this isn't a film that requires people of their caliber. THE BOURNE LEGACY never feels like it's intended to be anything more than a place holder until such a time as Matt Damon and BOURNE SUPREMACY and ULTIMATUM director Paul Greengrass decide they want to come back to the fold. In other words, this is the BOURNE equivalent of something like AMERICAN PIE: THE NAKED MILE or SCANNER COP that someone spent way too much money on. Gilroy does well on the direction side; this is a good looking and well paced film with some fun moments. He just can't overcome his own mediocre script, ensuring that this will never be more than a footnote to what is arguably the most popular and influential series of action films of the 21st century. 2 1/2 out of 4 stars.
Posted by Bob Ignizio at 12:01 AM