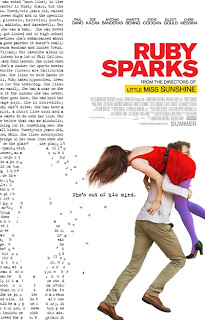 RUBY SPARKS, the new fantasy-romance directed by Jonathan Dayton and Valerie Faris, the husband-and-wife team behind the 2006 LITTLE MISS SUNSHINE, has a premise as old as Pygmalion: the quest by man to create the perfect woman. The screenplay was written by Zoe Kazan, the 29-year-old actress and playwright who is the granddaughter of celebrated director Elia Kazan.

The “sculptor” in this movie, played by Paul Dano, is Calvin Weir-Fields (dig that hyphenate name!), a former wunderkind author whose debut novel, published when he was 19, made him famous. Calvin is in a protracted sophomore slump, blocked as a writer and also failing at relationships. Looking studious and vulnerable in his round, authorial eyeglasses, Calvin frets about his writer's block, his love life (girls only like him because they read his book in high school) and his cute but unruly little dog, Scotty (named for F. Scott Fitzgerald). He pours out his troubles to his married brother, Harry (Chris Messina, who gets the only funny lines) and his therapist (played by Elliott Gould), who gives him a teddy bear to hug and a homework assignment. Calvin is to write about a girl who likes all the traits that make him feel inadequate.

Calvin's writing exercise is all too successful. The words he types on his portable Olympia magically materialize the actual girl of his imagination: Ruby Sparks, a quirky, clever, free-spirited painter who loves Calvin unconditionally. She has all the traits and background Calvin wrote for her: she's 26, unconventional and hails from Dayton, Ohio (“It sounds romantic,” explains Calvin, who has clearly never been to Dayton). Appearing one day in the park in a white dress and fuchsia tights, Ruby praises Calvin's dog, who happens to urinate like a female. “Your dog might pee like a lady, but I like him just the way he is.” Calvin, who needs the same kind of acceptance, is in bliss.

Ruby is the fulfillment of Calvin's narcissistic desires for a yielding, complaisant partner. She fits seamlessly into his life, singing cute rink-a-dink-a songs while cooking meatloaf for him. Calvin initially thinks he's lost his mind, but he discovers that Ruby is no mirage; other people can see and talk to her. Ruby is immediately embraced by Calvin's brother and his widowed mom (Annette Bening), a curly-haired neo-hippie remarried to a prosperous primitive-furniture maker (Antonio Banderas).

As in most Pygmalion tales, the artist's creation, now human, begins to take on a life of her own. Ruby begins to want more in life than keeping house for Calvin. When she makes some moves toward independence, taking art classes and meeting new friends, Calvin panics. Having discovered that he can modify her behavior by typing some lines – even, on a whim, making her speak fluent French – he desperately tries to keep her under his control. Clearly Calvin's problems with women run deeper than bad luck; the script offers insight in a scene where his ex-girlfriend confronts him at a book party, telling him, “The only person you ever wanted to have a relationship with is yourself.”

The movie has a certain energy and winsomeness, but like Calvin, it's a bit of a mess. Ms. Kazan's reliance on shopworn movie tropes – the rumpled writer clacking out words on his portable, the older, wiser best friend/brother, the flouncing, oblivious New Age mom (recently embodied by Jane Fonda in PEACE, LOVE, AND UNDERSTANDING), the wealthy, caddish rival (Steve Coogan as a randy author who tries to seduce Ruby). At times, the film evokes the kind of 1960s romantic comedy that might star James Garner and Doris Day, with Tony Randall as the best friend. Those '60s romantic comedies, though, had a lightness that is lacking in Kazan's discursive script, which takes many unnecessary side trips, including a pointless visit to Calvin mere's expensively rustic retreat.

The metaphysics of the story are muddled as well. By making the hero's mirage a flesh-and-blood person, Kazan is trying something different, which is commendable. But the story's internal logic is faulty. At one point, Ruby threatens to start spending some nights in her own apartment. Doesn't Calvin, who invented Ruby, wonder where that apartment could possibly be? Does she have a family that is also flesh-and-blood? Could Calvin really make her do anything, such as sprout wings and fly? Even a magical story has to make sense on its own terms.

Dano has the right look for the beleaguered writer, but has a tendency to overplay his reactions. Kazan, who is Dano's real-life girlfriend, has given herself the role of Ruby, which suggests that narcissism is not a trait exclusive to Calvin Weir-Fields. Kazan the actress, a little less pretty than the role calls for, is let down by Kazan the writer. “Quirky” rapidly curdles into “annoying” as Ruby's allegedly charming traits begin to grate. While I'm reluctant to criticize actors' looks, the script calls for Ruby to be the embodiment of a feminine ideal, a quirky beauty in the Zooey Deschanel mold. This, the plain-faced, recessive-chinned Kazan is not.

Kazan showcases her theatrical skills with a histrionic mad scene in which Calvin controls Ruby like a marionette, typing furiously as Ruby barks like a dog and just about flings herself against the walls. The paroxysmal mad scene characterizes the darkness that runs through the film, which is ultimately less My Fair Lady than Frankenstein. In the absence of genuine laughs, that darkness is the most interesting thing about the movie. Through his otherworldly experience, Calvin confronts his own pathological neediness and achieves a personal and creative breakthrough. The psychological insights, amid the cacophony of romantic-comedy clichés and Old Hollywood cameos, is is the movie's saving grace. 2 3/4 out of 4 stars.