[ROBOT AND FRANK opens in Cleveland on Friday August 31st exclusively at the Cedar Lee Theatre.] 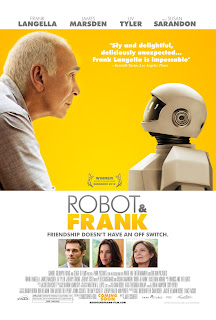 There’s no way around it: the stark reality of gradual cognitive dissolution does not a buoyant cinematic experience make. Earnest and touching as Sarah Polley’s AWAY FROM HER may have been, it’s not in my Amazon shopping cart. Anyone with an afflicted loved one can attest: Alzheimer’s is a stone-cold drag.

Robots and jewel heists, on the other hand…

In ROBOT AND FRANK, his first feature, director Jake Schreier never denies the harsh realities of Alzheimer’s, but, rather than focus on the  broad devastation of the condition, makes the disease one attribute of a cantankerous ex-second-story man about whom the film tells a small, hilarious and heartbreaking story. It’s the best type of speculative fiction, character-loyal and largely non-didactic, raising sweeping socio-cultural questions with a tight, self-contained dramatic narrative that’s confident enough to deliver an emotionally satisfying ending while leaving the sweeping (and uncertain) socio-cultural answers for each viewer to contemplate.

Succumbing to Alzheimer’s, but no less stubborn or hard-headed for it, former jewel thief Frank (Frank Langella) refuses placement in a nursing facility. His frustrated son, Hunter (James Marsden), now a father himself, agrees, as long as Frank is willing to accept his gift of a wellness robot - a li’l laconic spaceman-looking unit that will monitor the older man’s diet and health. Frank begrudgingly concedes and accepts the eponymous robot, which he soon discovers has the potential to be the partner in crime that, in health, he never required.

To thicken the gravy, first-time feature writer Christopher D. Ford sprinkles the plot with myriad tantalizing bits of sci-fi world building that never intrude enough to interrupt the story, but which hint at the larger ideological trends that shape the (as it’s billed in the beginning) “near future.” There’s Frank’s local library, employer of his crush Jennifer (Susan Sarandon) and her book-stacking robot, Mr. Darcy, as well as the future site of a virtual community space – a paperless digital museum where local yuppies can don VR gear and historically (read: ironically) engage with the experience of visiting a local public library.  Then there’s Frank’s flighty, idealistic daughter, Madison (Liv Tyler), a wannabe third-world savior who allies herself firmly with the pro-human labor movement… until she’s confronted with manual labor herself.

There’s a marked duality to ROBOT AND FRANK’s portrayal of android technology. On the one servo-powered grasping appendage, Frank’s robot is cleaving-edge tech, imbued with a human voice (expertly provided by Peter Sarsgaard), a full range of motion and a voluminous knowledge of health information. On the other, Robot’s more basic utilitarian functions – cooking, cleaning, gardening – necessitate a humanoid physique rather than the type of smaller, sleeker hardware or digital projection that populate other characters' homes.

It’s this hands-on material aspect of Robot that Frank comes to appreciate, not just because he enjoys having an ambulatory safe-cracker with a hard drive full of lasagna recipes, but because Robot’s utility echoes a focus on tactile skills that,  in Frank’s eye-narrowed estimation, “near future” - a world where a brainy son chooses ivy league education over blue-collar work, an idealistic daughter regurgitates empty rhetoric and libraries are reduced to spectacle – seems to have lost.

For Frank, Robot’s both the new world’s starkest mascot and his best means of successful escape into the past – breaking in to break out, as it were.

The old timer's return to crime, with all its building plans and lockpicks and heavy, sparkling spoils, is as much an attempt to reassert his identity – his mental competency and physical skill - in the wake of his memory loss as it is a bid  to re-secure tactile attachment to a bygone America that’s values shifted in time with its technology, to burrow out the forgotten mold in which his lost memories were forged. Theft, then, isn’t about the stealthy acquisition of material value, but rather a desperate and malicious reassertion of the value of physical material – matter and skill deftly pitted against concept and ideal.

The unlikely pairing of an advanced machine and grumpy old man makes for both an intermittently hilarious buddy comedy and a weighty rumination on the nature of identity and memory. Frank’s Alzheimer’s underscores the tragic fragility and fallibility of human memory (though, regretfully, Columbus  windmills the heartstrings with a ludicrously unnecessary third-act plot twist), as Frank, in losing memories of his past – connections, moments, people – begins to feel that he is shedding not just his independence, but some fundamental part of himself. Meanwhile, robot, who records and stores everything, remembering every hot minute verbatim, believes itself beholden to the binary dogmas of its circuitry.

And yet, recollections evaporating, Frank remains instinctively loyal to habits that have come unmoored from their foundations and loves whose origins have been erased. And Robot, identity preordained, learns to pick a lock and crack a safe. (3 out of 4 Stars)