[Back by popular demand, BOY screens Friday August 3rd at 7:40 pm at the Cleveland Cinematheque.] 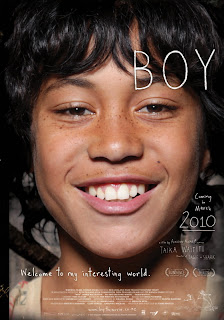 Happy accidents often make for better movies. According to legend, Shirley Temple was originally considered for the role of Dorothy in THE WIZARD OF OZ, which thankfully went to the more mature and vocally gifted Judy Garland. James Rolleston, who plays the titular 11-year-old in BOY, was originally an extra hanging out on the film set. Director Taika Waititi enlisted him three days before filming to replace the lead actor, who wasn't working out. Like everything else in this charming New Zealand comedy, Rolleston is perfect.

Set in Waihau Bay, New Zealand in 1984, the story centers on native Maori descendants living in ramshackle poverty in Waihau Bay, New Zealand. Boy, whose mother died giving birth to his younger brother, Rocky, lives a messy but relatively happy life on a farm with his grandmother, brother, cousins and a pet goat. (The farm setting and quirky characters, right down to the goat, call to mind a Kiwi Napoleon Dynamite.) He has a florid fantasy life, depicted in the film with entertaining animated collages. Boy worships Michael Jackson, believes a girl named Chardonnay (RickyLee Waipuka-Russell) is his girlfriend, and tells heroic tales about his father, who actually is an inept criminal serving jail time.

When his grandmother leaves for a week to attend a funeral, the boys' wayward father Alamein, appears, driving up in a fast American car with two disreputable confederates in tow. Played by actor-director Waititi, Alamein — named for the World War II El Alamein Battle – is a vivid character, vain, reckless and greedy, with a penchant for beer, marijuana and Shogun swordplay.

His dad's reappearance fuels Boy's fervid imagination – he believes his father will take him and Rocky away to live with him. Actually, Alamein has come back chiefly to dig up a packet of cash he buried on the property years ago. Unfortunately, he can't remember where he buried it, and the land soon looks like a spent minefield. Boy and the taciturn Rocky, who believes he has magical telekinetic powers, help their dad dig for the buried treasure that Boy dreams will buy them a wealthy life, in which they will “ride dolphins, drink cocktails and dress in tuxedos all the time.”

Alamein tries, in his own way, to act fatherly sometimes, bringing expensive gifts (probably stolen), cutting Boy's hair (badly) to resemble Michael Jackson's and giving the boys rides in his car. But his attitude toward parenthood is ambivalent. He acts more like a reprobate older brother, partying all night with his “gang,” The Crazy Horses, and at one point telling Boy not to call him “Dad,” but “Shogun.” Boy's fantasies collide harshly with his dad's thoughtless and sometimes brutal negligence. It's easy to imagine that his late wife, seen in poignant flashbacks, did not have an easy time being married to him.

Waititi, a triple-threat writer, producer and actor, has succeeded in finding a graceful balance between humor and sentimentality. It's easy to see why BOY collected so many film festival audience awards on its release in 2010. 3 1/2 out of 4 stars.