[REAR WINDOW screens Thursday August 9th at 7:30 pm at the Palace Theatre as part of Cinema at the Square.] 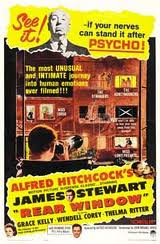 What to add about Alfred Hitchcock's thriller classic REAR WINDOW?  Whole college courses have centered around Alfred Hitchcock's fiendish, compact and sometimes lighthearted 1954 nail biter. Even in the lingo of the text-message generation, U should C it!

News photographer Jeff (James Stewart), is confined to a wheelchair after breaking his leg shooting a car race. Now he recuperates in his Greenwich Village flat, getting occasional visits from his gorgeous model-girlfriend Lisa (Grace Kelly) and putting up with a visiting nurse. Bored by immobility and equipped with an arsenal of binoculars and telephoto SLR lenses within reach (even vintage as they were, how I salivated over those lenses during my own would-be photographer days), Jeff amuses himself by spying on his neighbors across the courtyard. Jeff finds that each tenant embodies a different pathology of male-female relationships. At first it's funny to Jeff, seeing a newlywed woman wearing down her husband with frequent lovemaking (broadly but coyly hinted at, nothing shown) and a solitary bachelorette going dateless night after night. But then there's a burly guy named Lars (Raymond Burr), unhappily married to a nag. Faraway clues and guesswork convince Jeff that Lars has just snapped and murdered his wife, then possibly dismembered her body in packing cases. But is Jeff correct in his dire assumptions? And how to convince anyone? And what if the menacing Lars discovers he's been watched?

The tension gets exquisite; my little sister told me of watching REAR WINDOW with her coterie of college cronies, and even those denizens of the depths of the MTV demographic were riveted and broke into spontaneous applause when Jeff finally succeeds in persuading Lisa that something very bad went down with the neighbors. Viewers unaware of this film's reputation might almost miss the cinematic gimmick that made REAR WINDOW such an achievement: it never leaves Jeff's room. Not once. But this is no low-budget affair. Hitchcock had Paramount build one of their largest soundstages to date, erecting a full-scale Manhattan apartment facade with fully-furnished rooms and an adjacent street and alleyways, granting the Master of Suspense full control over distant interior lighting, angles and negative space through his viewfinder. As a result, the POV outside Jeff's rear window into the other windows is like looking into an array of TV screens (or comic-strip panels), the little New York stories unfolding in each one, often simultaneously. Amazing REAR WINDOW fun fact: that's really Ross Bagdassarian, creator of the Chipmunks cartoon characters, as a songwriter.

Throughout his career James Stewart was a boyishly all-American good guy, though there were a few exceptions, and Hitchcock especially like to tap into an inner darkness using the wholesome actor. Though he's partially a victim of his disability, Jeff does seem to enjoy being a peeping Tom, and there's a question of whether his new pastime of voyeurism is a healthy one or not - never mind the crime-solving fringe benefits. And what's the deal with him enjoying looking at strangers, but avoiding sexual intimacy with the beautiful, accommodating Lisa? If wanting to watch makes Jeff some sort of pervert, what does that make us, the audience? We're watching him...watching them... Little or none of this vibe, by the way, is in the Cornell Woolrich short-story source of the same name; Hitchcock kept the essential plotlline but brought his own macabre baggage to the adaptation.

In the age of `reality-TV' and embarrassing YouTube internet clips, REAR WINDOW has relevance indeed, even though its morality and ambiance is a little nostalgic. Hitchcock's hit was pretty much remade as a teen thriller, DISTURBIA in 2007. There was also a so-so 1998 TV movie version of REAR WINDOW, noteworthy for casting a lead actor tragically wheelchair-bound in real life - the paralyzed Christopher Reeve. But the original tops them all. (4 out of 4 stars)