Quill: The Life of a Guide Dog (August 17th and 18th at the Cleveland Cinematheque)

[QUILL: THE LIFE OF A GUIDE DOG screens Friday August 17th at 5:30 pm and Saturday August 18th at 7:00 pm at the Cleveland Cinematheque.] 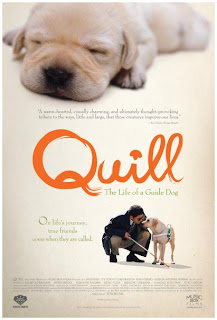 In the tradition of OLD YELLER and other kid's movies that will tear your heart out and stomp on it comes QUILL: THE LIFE OF A GUIDE DOG. Although QUILL is in most regards a family friendly film, it bears mentioning that the subtitles may not go over well with some kids (or their parents for that matter). And then there's the straightforward way it deals with tragedies of both the human and canine variety. There's certainly nothing inappropriate for kids here, but parents may want to consider whether their children are emotionally able to deal with some pretty sad stuff. Now with that out of the way, on to the merits of the film itself.

QUILL is based on the true story of a seeing eye dog in Japan that begins with the birth of the titular pup and follows him through all the stages of his early growth, training, placement with a blind person, and beyond. That allows viewers to get some idea of the work that goes into training a guide dog and the way that training pays off for the person the dog is assigned to. In addition, the film includes an interesting human story via Quill's owner, Mr. Watanabe (Kaoru Kobayashi).

Watanabe is fairly young and has a wife and kids. It's not spelled out, but it's implied that his blindness is the result of hard living when he was younger that eventually led to diabetes, with the blindness being a complication thereof. Watanabe now works as an advocate for the disabled in his home town, but has such an independent (some might say curmudgeonly) streak that he refuses at first to allow himself to be led by an animal. Eventually, of course, he gives in and over time forms a bond with Quill. But where the movie goes from there may surprise you.

In many ways, this feels kind of like a throwback to an older era of family film, when Disney would produce pseudo-documentary nature films that featured mostly staged animal activities and sought to anthropomorphize their subjects. This isn't as candy coated as those films were, but the approach is similar. QUILL ultimately is a little too distant despite some emotionally wrenching moments to really be a great film, but it does make for a pleasant break from all those Pixar and Dreamworks computer animated kid flicks that seem to be about all the movies have to offer kids these days. 3 out of 4 stars.