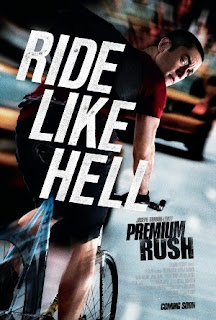 An overqualified bike messenger abandons a promising career for a job making high-speed deliveries in a concrete jungle, with some musical motivation from rocker Roger Daltry.


But while lay over 2,500 miles from as the crow flies (or cyclist rides), there’s less than six degrees of separation between Bacon’s brash day trader (and Daltry’s “Quicksilver Lightning”) and Joseph-Gordon Levitt’s jaded adrenaline junkie (and The Who’s “Baba O’Riley”) in PREMIUM .


Levitt (INCEPTION, THE DARK KNIGHT RISES) is Wilee, a law grad who ditches cubicles, courtrooms, and “grey suits” to pedal high-priority packages around on a “fixie” bicycle with only one gear.


We never discover why Wilee didn’t take the bar examination, or why he ever wanted to become an attorney in the first place.  One suspects, given his occupation, that his parents covered the tuition (or are stuck paying the loans) and can’t be pleased with his new gig.  Wouldn’t you be pissed if you incurred a hundred-grand debt so your 25 year old could breeze through an Ivy League school, only to refuse to test for his professional license upon graduating?


It’s just one of many laces director David Koepp doesn’t bother tying during ’s brisk ninety minutes.  Renowned for crackerjack screenwriting (SPIDER-, JURASSIC PARK, MEN IN BLACK 3), Koepp draws in viewers with a deceptively simple plot calling for Wilee to transport an envelope across town at the end of a hectic business day in ninety minutes—with several cops (good and bad) giving chase.  Indeed, the action begins in medies res, with our first glimpse of the hero being a slow-mo shot of him going airborne after an accident.


But then Koepp backpedals, leaving Wilee on the pavement to flesh out the movie’s villain and token girlfriend.  We get some exposition on bike messenger culture—their lingo, their need for speed, their reasons for carrying oversized chains despite the extra drag they must cause (the couriers use them to vandalize cars who cut them off).  They speed through major intersections while blue-toothing each other with news, gossip, and friendly barbs.  There are young messengers and old ones, and they share a special solidarity—even with bikers from rival agencies—because of the precarious (and time-sensitive) nature of their work.


Koepp then plays catch-up to Wilee’s opening fender-bender, but the non-linear “flashbacks” aren’t necessarily jarring because he provides fresh info in scenes that pick up on ones we saw minutes earlier, albeit from different angles.  The devil’s in the details, and we’re left wondering why the protagonist wastes his time at a vending machine when moments ago he scarfed down half a veggie wrap.  An early offhand remark about Wilee’s talent at “trick” biking pays off later, when he does a bit of bicycle Parkour at an impound lot—but is rife with dead-ends and “clues” for things that never materialize.  We’re lead to think it’s significant that Wilee’s pickup point is his alma mater, when instead it’s just another coincidence manufactured to hurry things along.  Same with the connection between Wilee’s girl and his current client; there’s a nexus, but it’s insignificant.


Wilee’s love interest (Dania Ramirez) and competition (Wole Parks) think he has a death wish, but nothing ever surfaces to suggest our boy has real mental issues.  Will this misadventure force Wilee to mend his daredevil ways and perhaps take up law again?  We’ll never know.   Wilee just wants to ride, man.  Be free.  He’s even disabled his brakes to ensure he’s always looking for the optimal route ‘round whatever obstacles lay ahead.


His dispatcher is Aasif Mandvi, who played Peter Parker’s pizza delivery boss in SPIDER- 2.  So I expected Mandvi to fire some poor messenger and rip the sticker off his helmet.  We aren’t shocked to hear Wilee is the best at what he does, which is why one troubled client tells Mandvi to send him for her precious cargo.


Wilee zings past taxis, slides under semis, rockets off staircases, and ignores red lights.  With his buzz haircut, red tee, and biker shorts Levitt certainly looks the part of an avid cyclist.  Wilee favors sophomoric taunts like “douche bag” and giggles like a toddler when outfoxing pursuers, but he’s otherwise likeable and sympathetic enough.  Still, we feel for the NYPD biker cop Wilee dupes repeatedly, even as we’re laughing at him.


Some of the film’s eye-candy (and laughs) arrives when Wilee visualizes his navigational choices; we get to see his options play out before he steers.  Go this way, and he’s likely to hit a mom pushing a baby stroller.  Go that way he’ll wind up a hood ornament.  At one point he makes a crucial turn based on glass window reflections of the otherwise invisible dangers ahead.  Koepp also provides some NFL-like computer graphics to chart Wilee’s progress through the congested metropolis.  overviews of Manhattan’s skyscrapers give scope to the mission, and a digital clock occasional that pops up now and again impresses just how long (or not) he has to travel X blocks.  A handlebar cam helps us see from the cyclists' POVs.


Desperate Detective Bobby Monday (Michael Shannon) makes a goofy entrance. His eyes are wild and his voice is cartoonish ( will make an interesting General Zod in OF STEEL), which makes for some snappy dialogue when he plays the “I’m a cop!” card with the Chinese mobsters he’s indebted to.  effectively spins Monday’s predicament into a convincing and twisted malevolence.  He apologizes when he accidentally beats one man to death—but then inflicts pain mercilessly on another.


After a summer saturated by actioners where the fate of an entire city (DARK KNIGHT RISES, AMAZING SPIDER-MAN), nation (HUNGER GAMES), or even an entire world (AVENGERS, JOHN CARTER) hangs in the balance, it’s refreshing to watch an old-fashioned chase movie whose outcome matters only to a couple ordinary people, and whose good guy does what he does not because he must, but because he chooses to stay involved.  Wilee could surrender the package at any time and just go home, but knows he wouldn’t be able to sleep once he got there.


Heroes keep pedaling.  Even when they’ve got no brakes.