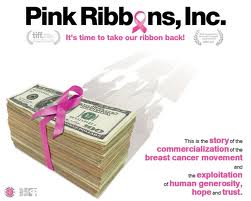 Don’t know if you caught the latest Cleveland arts embarrassment, but this summer the Gathering Place, a Westlake institution for cancer patients and survivors, was supposed to host an acclaimed photographic chronicle by Angelo Mendino, a Cleveland native (like LeBron, he left the area) who used his lens to chronicle the grueling ordeal his late wife faced as they both confronted her breast cancer diagnosis and treatment together. But Mendino’s up-close-and-personal view of the dreaded disease proved too much for the suburban venue and they closed the exhibit within the week (a downtown Cleveland art gallery picked it up, at least).

Meditate upon that as you watch PINK RIBBONS, INC., a searing Canadian documentary which aims to toss mud on something many quivering journos would consider sacrosanct, the upbeat anti-breast-cancer campaigns as embodied in pink-tastic campaigns by major corporations, most partnered to the ubiquitous Susan G. Komen Foundation.

Canadian documentarian Lea Pool's sour and unabashedly capitalism-bashing thesis is that a growing epidemic of women's breast cancer has, well, metastacized into just another marketing ploy for big business. Avon puts on giant pink-colored "walk" rallies, smiling young (male) "street teams" are shown pushing Yoplait Yogurt with pink lids, Ford Motors claims to have a car with "cancer warrior" appeal, and Niagara Falls are lit up overnight with pink. Okay, but what exactly does all this cancer kitsch mean?

Barbara Ehrenreich, one smart cookie of a journalist who, in her book Nickel and Dimed, was way ahead of the rest of the corporate media in pointing out that the new "service economy" was creating a crisis of low-income wage-slaves, was diagnosed with breast cancer. She says she's not comforted by pink-ribboned everything and the neurotic forced cheerfulness of Komen pep rallies, relays, dragon-boat races and skydiving sisterhoods. Ehrenreich doesn't mention names but it seems she's not happy with the "cancer vixen" and "super sexy cancer" authors who have emerged of late and tried to endow breast cancer with some twisted kind of happy-face feminine accessory or rite of passage.

And that's a sinister "pinkwashing." Consider: pink-ribbon-festooned product sales, representing pennies and tiny percentages donated to cancer research, are just a pittance compared to the tumor-big profits raked in by the likes of Revlon, Estee Lauder, Kentucky Fried Chicken (!?!) and Ohio's own Procter & Gamble - whose plastics, cosmetics and processed food (at least according to this jaundiced flick) contain ingredients suspected of causing cancer. Hard to tell, really, because - aside from biased documentaries - the powerful corporate lobbyists behind these manufacturers don't want you to know exactly what's in their chemical wonder-formulas.

Furthermore, we're told, the research being corporate-funded focuses on highly profitable mammography and radiation/chemo treatments - as opposed to wholesale cancer-prevention measures, that might result in those pesky anti-pollution regulations that the Reagan Revival found so abhorrent. The Susan G. Komen Foundation, which has raised nearly $2 billion, is faulted for staying away from funding any cancer-fighters who may make things bad for corporate bottom lines. Know that this documentary was made before Komen Inc. got lots of bad press for sucking up to the Right regarding abortion; viewers of PINK RIBBONS, INC. may decide that the best-known foundation fighting breast cancer has been on the wrong side of women's issues for longer than that.

Being able to use "whore" and "Susan G. Komen Foundation" in the same sentence - now that's pretty edgy. Of course, this is very much an op-ed piece, though drawn from Samantha King’s book Pink Ribbons, Inc., so check those footnotes. I found one obvious mistake in PINK RIBBONS, INC. The picture states up front that breast cancer affects only women. Sorry to betray feminism, but the disease does strike a small number of males as well (and I wouldn't be surprised if the percentages are growing). I do believe a video instructor at the Cleveland Institute of Art who died about a decade ago suffered from it.

Maybe if male breast cancer, or prostate cancer in younger males, also skyrockets like the Dow Jones Average did in the 1980s and 90s there might be an upside in the catalogs of “Blue Ribbon” branded-marketing products – you know, beer, guns, condoms, Viagara – and the cancer-industrial complex can continue smiling all the way to the bank. (3 out of 4 stars)
Posted by Charles Cassady Jr. at 12:01 AM