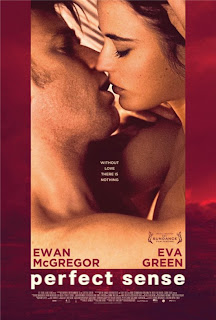 Earlier this year Bob Ignizio expressed a marked lack of enthusiasm for yet another art-house end-of-the-world movie. It wasn't MELANCHOLIA - that one was good, evidently - it was some sort of genre relation with lots of numbers in the title.

Well, just to show Bob that we feel his pain, and that he doesn't have to suffer through every mopey, Sundance-acclaimed, Cedar Lee-playing emo-type dramas about the end of the world from an average doomed soul's POV, I'll dump all over PERFECT SENSE, yeah, even though it bids to be more serious and grownup than the usual CGI zombie/meteor apocalypse.

The premise can't help but recall a movie I confess I haven't seen - which is ironic in so many ways - the by-reputation-equally bleak art-house drama BLINDNESS (2008), in which a plague of sightlessness struck a whole city except for Joan Allen. Kick that idea up a couple notches, literally, and you've got PERFECT SENSE. Untypical setting is , where Michael (Ewan Macgregor) is a hardworking restaurant chef living near to epidemiologist Susan (Eva Green). Their paths cross, fatefully, coincident with the worldwide outbreak of a baffling new disease that Susan and her colleagues haplessly investigate. It starts with an absence of smell, then a loss of taste - the latter a real blow to the Michael's restaurant - and so on, apparently progressing cruelly and inevitably to erasing all five senses.

Michael and Susan fall in love, though each has contracted the condition, just like everyone else on the planet, apparently. Further complicating their relationship is that with each new loss of sense there's usually an uncontrollable emotional outburst (and severe hunger pang), and during one of them Michael blows up at Susan for her inability to have children. There seems no cure, no contagion-vectors, no answers to the bizarre malady, and as deafness descends upon the land, can the two lovers reconcile in time for oblivion?

Pretty glum stuff. I'd like to say self-important, though I suppose if there were a disease gradually switching off all five senses for everyone that would be pretty self-important, yes indeed. Still, the mystery illness mainly comes across as a heavy-handed metaphor for...something or other...with the background theme that with each new setback the human race still struggles to adapt. "Life goes on," goes director David Mackenzie’s mournful narration refrain.

Acting is good - meaning depressing. Though if you think most epidemiologists look remotely like certified hottie Eva Green (or, if you're a female, you think most struggling chefs look like Ewan Macgregor), well, okay, at least it’s a great advert for the Aberdeen Convention &  Visitors Bureau. Forgive my cynicism, but the downbeat, dirge-like drama didn't thrill me all that much, even if the premise is a bit haunting. Would I have preferred it had more kickass action and calculated crowd-pleasing elements like I AM LEGEND and similar mainstream-Hollywood planetary-extinction fare? No, that probably wouldn't have helped either.

I guess in the end PERFECT SENSE provides the sort of deep-thought /pretentious head trip that used to be on the bill whenever something remotely resembling a sci-fi or horror creature-feature got accepted at Sundance, or the Cleveland International Film Festival (before post-modern irony and THE BLAIR WITCH PROJECT made even Troma stuff acceptable fest fare). Okay, take it or leave it. Life goes on, they say.

The idea of world-ending event from the helpless vantage of innocent-civilian star-crossed lovers is still best rendered, in my humble opinion, in the 1980s cult movie MIRACLE MILE. Anyone remember that nuclear blast from the past? I think it unreeled in `real time,' too. Please tell me there won't be a remake of that with Zac Efron and Demi Lovato. Or one of PERFECT SENSE, either. (2 out of 4 stars)
Posted by Charles Cassady Jr. at 12:00 AM