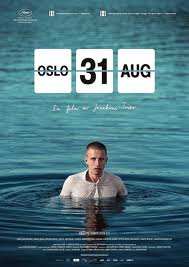 In fact director John Ewing programs a wide diversity of material. But when a slash-your-wrists narrative comes along like OSLO, AUGUST 31ST, it tends to erase all memory of laughs and good times. The 2011 Norwegian feature is indeed showing at the Cinematheque on August 31, which has got to be, I dunno, the art-house equivalent of Real3D, no? Anti-hero of the piece is Anders, played by Anders Danielsen Lie. So you're watching a guy named Anders play a guy named Anders in a movie called  "August 31st" on an August 31.  What's not to enjoy? You'll be sorry you asked.


The cinematic Anders is a good-looking but utterly desolate intellectual in his early 30s, getting out of rehab after his chronic heroin use.  A break with his offscreen girlfriend helped send Anders into a tailspin, and he harbors no hope of getting back together with her. Indeed, at the outset he tries to kill himself by drowning, but it doesn't work. Still, Anders tells an old buddy that if someone has made up his mind that his life is a worthless screwup, he should have every right to end it, which is a bit of a SPOILER ALERT.

Anders has a history as some sort of journalist, though he brushes it off, claiming he was really just a drinking-drugging buddy to editors who published his writings in the spirit of bar-stool fellowship. Nonetheless, his counselors have arranged for him to have a job interview at some trendy Oslo publication, a last chance that Anders basically just throws away. ANGRY REVIEWER ALERT: You know, I majored in Journalism, - as opposed to drinking or drugging. And I freelanced steadily and soberly for decades until all my  media outlets were either out of business or downsized to nothing. And I've never had a job opportunity handed to me like this Anders fellow. Not even a damned editorial-assistant interview. So you might say this script didn't endear me there - or with what happens subsequently. Anders wanders Oslo, encountering old friends, and gets some come-hither stares and flirty remarks from Scandinavian lovelies. But none of this brings him out of his fathomless pain and torment. It probably goes without saying I haven't had a topless cutie make eyes at me by the swimming pool either, especially on my worst days. Strange about that. That's why the picture isn't called CLEVELAND, AUGUST 31ST.

And so Anders goes. Attendees at the Cleveland International Film Festival might remember that several years ago there was an out-of-body drama from Scandinavia called INVISIBLE that seemed like a Swedish version of GHOST until the very end, when it turned into an argument in favor of assisted suicide. Yes it did; very culturally acceptable over there, I guess. That detail was lost when INVISIBLE got an Americanized PG-13 remake, needless to say. So if OSLO, AUGUST 31ST does get remade by Hollywood (my suggested title: LOS ANGELES IMPERSONATED BY VANCOUVER OR TORONTO, AUGUST 31)  you can expect things to work out happily for Anders in the end. But not in this version ,

I guess I should compliment the despair drama about something. It's well-acted, handsomely shot, and if director Joachim Trier had eschewed the tripod and smooth camera dollies and shot it on low-cost, hand-held digital video he could have easily earned a Dogme95 certificate - does anyone care anymore about Dogme95? I don't think even the people who invented Dogme95 care about Dogme95 anymore. No wonder I have fewer friends than Anders...Anyway, if you do attend OSLO, AUGUST 31, it's probably the least likely movie in America where a gun nut dressed as a Batman villain will come into the auditorium and shoot at you, and that's saying something.

Whether you will want to shoot yourself afterwards is another matter altogether. Sorry, Cinematheque, but stuff like this has made your reputation. (2 out of 4 stars).
Posted by Charles Cassady Jr. at 12:01 AM