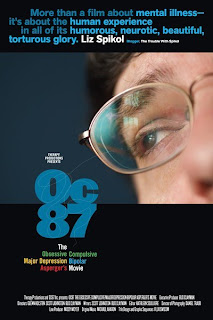 “This is not a film about hand-washing,” says Bud Clayman, the co-director and subject of OC87: THE OBSESSIVE COMPULSIVE, MAJOR DEPRESSION, BIPOLAR, ASPERGER'S MOVIE.  “It's a film about thoughts.” The proviso is meant to refute the common notion of obsessive-compulsive disorder as involving behaviors like repetitive hand-washing. Clayman has suffered for more than half his life from a constellation of disorders including “Harm OCD,” which means he's plagued by intense anger, extreme social anxiety and intrusive thoughts and fears about hurting others.

The 2010 documentary, the culmination of a promising film career cut short by mental illness, focuses on Bud's experience battling his mental demons and his efforts at recovery.

Bud, 47 at the time the film was made, was a college student when he began falling apart. Before his graduation from Temple University,, he broke down completely; his mother recalls her shock at seeing his squalid living conditions. Yet Bud still harbored hopes of being a filmmaker. He managed to pull himself together and travel to California, where he actively pursued work in the movie industry. Without friends or support on the West Coast, he came home defeated. Bud's father, a successful watch factory owner who is divorced from Bud's mother, initially pronounced his troubled son “lazy,” but eventually gave Bud a job with the family's charitable foundation. The job provides a supportive environment in which Bud can function despite his anxieties and eccentricities.

The movie follows Bud's efforts to manage his disorder, with the help of a therapist, a recovery group and his parents. His mother, a designer, has offered to give his apartment a makeover, and his father, an old-school dad who still does not understand Bud's illness, has financed the film. We see Bud and his co-directors in the process of making the film, recording Bud's recovery activities and thoughts about living with mental illness. Ordinary activities like riding on a bus or dining alone at a restaurant counter are harrowing for him, and he employs self-talk to help him control his disturbing thoughts. “People can't read your thoughts,” he tells himself. “Don't stare. Keep walking. Listen to the therapist.”

OC87 provides fascinating insight into the nature of the disorder and its many effects on Bud's life. His therapist dramatically demonstrates that Bud has control over his behavior in spite of his dangerous thoughts by holding out his hand and having Bud suspend a large pocket knife over it. Part of Bud's recovery involves talking with other people dealing with the same condition, and the film features interviews with a newscaster who suffers from “harm OCD.” The newscaster articulately He describes the nature of his irrational fears – for example, hearing a noise from under his car while driving, he imagines he has somehow hit a pedestrian without knowing it. (I have had this fear, too, which to me demonstrates that mental disorders are sometimes merely exaggerations of "normal" tendencies). Bud also interviews an actor he admires, Maurice Benard, who has a role on General Hospital. Benard describes his intense struggles to overcome bipolar disorder, using boxing as a way of focusing his mind and body.

Bud's disorder has severely affected his social life, and his recovery journey also includes an attempt at speed dating and a pleasant karaoke evening with members of his recovery group. The most poignant segment involves Bud's reconciliation with a former friend and mentor. Bud and his erstwhile companion have not spoken since a falling-out decades ago when Bud, unable to process ordinary social experience, took extreme offense to his friend's offhand remark. As the camera captures the two former friends together, his aging friend now leaning on a cane, the tragedy of the lost years is poignant.

It is interesting to note that Bud's treatment appears to involve cognitive therapy rather than medication, which seems to me a good thing. The movie does not delve deeply into the etiology of this disorder or address possible social causes, such as his parents' divorce or his father's lack of understanding. This is primarily a story of healing and reconciliation. Bud's father admits his son's condition is hard for him to understand, but through collaborating on Bud's film, father and son grow a little closer.

This is, in a way, two movies – the movie about Bud's life, and the meta-movie about Bud making the movie about his life. It becomes three with a sequence in which Bud fulfills his dreams of acting by making and starring in a short fantasy film he wrote based on his childhood Lost In Space fantasies. It is clear that Bud has intelligence and talent. One wonders if Bud will go beyond this autobiographical film and continue to create. 3 1/2 out of 4 stars.
Posted by Pamela Zoslov at 12:01 AM