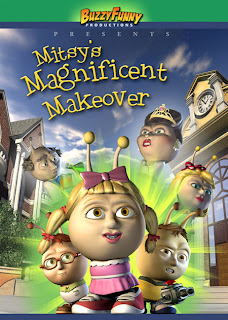 Why does the Cleveland Movie Blog, our tastes leaning a bit Ghoulardiward at all times, take note of a minor-key kiddie direct-to-video babysitter like MITSY'S MAGNIFICENT MAKEOVER? Does it represent the final, unreleased masterwork of Lucio Fulci? Does it include the famously censored decapitation scenes, finally discovered on Hong Kong laserdisc? Does it get away from the campy, silly Mitsy of the 1960s and back to the original, dark, brooding psychotic Mitsy of the 1930s and 40s?

No, the deal is that this all-CGI semi-musical children's short feature (or long short subject) is that it represents yet another step forward for true "desktop filmmaking." Francis Ford Coppola, if my memory serves me right, prophesied that, with the advent of digital film and computer-editing suites affordable to the masses, someday the next CITIZEN KANE would not hail from a mighty Hollywood soundstage but rather from the bedroom of some adolescent Jewish girl in Cleveland.


Well, MITSY'S MAGNIFICENT MAKEOVER is no CITIZEN KANE, nor does it come from Cleveland (that would be UNEMPLOYED GUY KANE; Coppola was a little off on that one), but it does show, I do believe, a significant step towards the prediction's fulfillment. MMM certainly looks a lot like a big-studio digital cartoon, if not Pixar-grade than at least JIMMY NEUTRON - BOY GENIUS. Yet, it was a two-person DIY project from Buzzyfunny Productions, which is/are California-based husband-and-wife actors-filmmakers Eric and Heather Smith. Apparently he's an industry professional, she's a teacher, and they had planned out some sort of fancy digital feature with producers on the theme of childhood self-esteem and bullying. When that whole project fell through, the pair simply did it themselves - using common 3D-modeling software (I would guess something akin to Bryce 3D, but I'm no expert) Eric's own plug-ins that enhanced skin tone especially, and a low-tech voiceover-recording studio in their home, blankets hanging to muffle sound and everything.

The result: instant movie, and not looking too shabby. One does wonder where all the hundreds of millions of bucks for "hard drive space" and all that for creating digital landscapes really goes in the commercial film racket. Laundering all the drug money in Orange County? I could believe it after seeing this.

The Smiths evoke a Fisher-Price-esque world of hopping, antennae'd, armless humanoids - the vaguely insectoid characters manipulate objects via telekinesis, and I would guess the physiognomy saves PC time rasterizing limbs, feet and fingers and stuff.  Small-town schoolgirl/school-thing Mitsy is throwing a birthday party, but fickle classmates spurn her for rich mean-girl Leelu Belle, daughter of a laid-back rock star called Ringo Belle his less likeable, aging-supermodel wife. Rebounding from the snub, mishap-prone Mitsy and friends Hermie and Falwell discover Mrs. Belle is secretly in league with sinister Dr. Façade, her high-tech cosmetologist, who on the side has been experimenting with a mind-control gimmick. At a big charity concert the baddies plan to unleash the device, a tiara by which Leelu's mom can hypnotize the townsfolk and be irresistibly popular.

Yes, the material is a bit thin even by CARS 2 standards, though there is a very funny RAIDERS OF THE LOST ARK takeoff at the start. The character-building message about self-acceptance is on the level of, I guess, a secular version of the "Veggie Tales" franchise, with which I have little experience but which I don't believe was a total garage-filmmaking effort like this.

While the DVD extras include a making-of that shows the graphics/character evolution, I really would have enjoyed more of a technical tour into the Smiths' accomplishment. Really, the bigscreen sleeper HOODWINKED looked considerably lower-rez than this. MITSY'S MAGNIFICENT MAKEOVER may not make any history books (yet), but it shows what the current state of things is with digital filmmaking putting the tools into anyone's hands. This is a situation in which we may all rejoice - or not, as another documentary I watched on silicon-chip technology in the arts warned of a creative landscape of "gray goo," mediocre material by the masses drowning out any truly CITIZEN KANE-type works of genius. Whether middling Mitsy and the Smiths are part of the problem or the solution is a little too early to say. But considering it's harder to make a tolerable kiddie picture than a lazy slasher picture, I was modestly impressed, for what it's worth. (2 out of 4 stars)