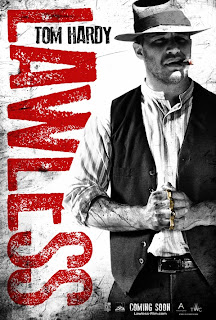 LAWLESS tells the more or less true story of prohibition era moonshiners the Bondurant brothers: Forrest (Tom Hardy), Howard (Jason Clarke), and Jack (Shia LeBouf). They're hardly the only ones in Franklin County, Virginia making and selling bootleg liquor, but they are the only ones who refuse to give a cut of their profits to the new Attorney General and his lackey, Special Deputy Charlie Rakes (Guy Pearce). It doesn't take long for the feud between the two factions to turn violent, and Forrest winds up with his throat cut. Don't worry, he gets better.

Given the larger than life nature of these characters, it's hard for the film not to glamorize them. However, as was the case in THE PROPOSITION, director John Hillcoat's previous collaboration with screenwriter/composer Nick Cave, the violence these men do is presented in ugly, unflinching detail that makes it difficult to view anyone in the film as a hero. That said, this is nowhere near as bleak a film as THE PROPOSITION. In between throat-cuttings, castrations, and machine gun assassinations, LAWLESS actually has a considerable amount of humor. There's even a little romance, with Chicago expatriate Maggie (Jessica Chastain) doing her best to get the attention of the clueless Forrest. Meanwhile, Jack takes on the seemingly futile pursuit of courting Mennonite preacher's daughter Bertha (Mia Wasikowska).

The entire cast does excellent work here. LeBouf is clearly relishing the chance to prove he can do more than run away from CGI robots and explosions, but it's Hardy who makes the biggest impression with his minimalist performance. His Forrest is a man of few words, often communicating a great deal in just a few grunts. He's shy and, underneath the rough exterior, a nice guy who just wants to take care of his family, but there's also an undercurrent of violence rippling just beneath his surface. The female leads (if it's even fair to call them that) aren't given much to do, but both Chastain and Wasikowska acquit themselves well with what they're given. Pearce's turn as the villainous law officer threatens to cross the line into caricature at times, but you can't say it's not an interesting performance.

Finally, the soundtrack by Cave and fellow “Bad Seed” Warren Ellis bears mentioning. They two of them have taken songs by the likes of Captain Beefheart and The Velvet Underground and re-imagined them in psuedo-bluegrass form. Cave sings a couple of tracks, but most of the songs are performed by guest vocalists Willie Nelson, Emmylou Harris, Mark Lannegan, and Ralph Stanley. All too often these days soundtracks feel generic and/or just thrown together, but this is a real case of the music adding an extra layer to the film. 3 1/2 out of 4 stars.
Posted by Bob Ignizio at 12:01 AM