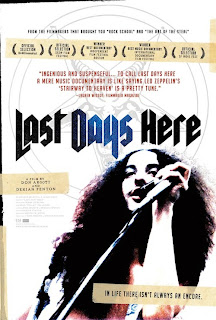 There is no shortage of talented artists whose lives have been cut short by drugs. As tragic as these individuals are, our culture has a tendency to romanticize them. To quote an old adage, they lived fast, died young, and left good looking corpses. Less easy to glamorize are the walking wounded, people like Pentagram vocalist Bobby Liebling. When we first meet the fifty-something Liebling in the fascinating documentary LAST DAYS HERE, he's smoking crack in his parent's sub-basement while recalling past glories. All one can feel for the man is a mixture of pity and horror. As we learn more about his state, it seems impossible that he's even alive.

Not many people know who Pentagram are/were, but in the seventies they were a promising hard rock band that seemed destined for big things. It's often said that opportunity only knocks once, but in Pentagram's case it knocked at least twice: First when Gene Simmons and Paul Stanley came over to scout the band, and later when noted producer Murray Krugman (Blue Oyster Cult) tried to record a demo with them. Both times the band managed to screw things up royally. Before long Pentagram broke up, though not before leaving behind a handful of demo and rehearsal tapes that would eventually grab the attention of hardcore heavy rock aficionados.

One of those aficionados is Sean Pelletier, a Pentagram fan who winds up acting as Bobby's manager and appears to be his only real friend at the time directors Don Argott and Demian Fenton began shooting. His efforts to get his idol back into the world of the living and the effects that has on his personal life become a major part of the story the film tells. We also see a good bit of Bobby's parents, who some accuse of being enablers for letting their drug addict son continue to live at home, and we hear candid comments from former band members who respect Bobby's talent but could never bring themselves to work with him again.

Some might be disappointed that there isn't more focus on the music of Pentagram in LAST DAYS HERE; there's probably enough to give the unitiated some idea what the band sounds like, but not enough to really put into context what all the fuss is about. That's not really what this movie is about, though. It's a story of survival and redemption, and what directors Don Argott and Demian Fenton capture here is truly remarkable. Over the course of their film, we see Bobby change slowly and painfully, and not without setbacks. While it would seem impossible based on the man we first meet in this film, it starts to look as if not only might Liebling clean himself up, opportunity might knock a third time, and there might even be the prospect of love and family. 4 out of 4 stars.

Cleveland fun fact: Pentagram's current drummer as of this writing is Sean Saley, who played is several Cleveland area punk bands in the eighties including The Guns and Starvation Army.
Posted by Bob Ignizio at 12:01 AM