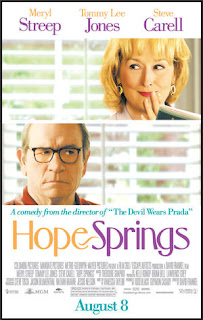 Vanessa Taylor was battling a case of writer's block when she penned the script for the feature film HOPE SPRINGS. Taylor, a writer and producer of HBO shows including Game of Thrones and Everwood, conceived a story about a middle-aged couple who seek counseling to revive their faltering marriage. Taylor imagined it as “a tiny indie movie” until someone showed the script to Meryl Streep, who jumped aboard and enlisted The Devil Wears Prada director David Frankel. With Sony's backing, the tiny movie became a major release starring Streep, Tommy Lee Jones and Steve Carell as the therapist who helps the couple rekindle their love.

That the movie got inflated into a star vehicle means that viewers are treated to a virtuoso duet by two seasoned actors. It also makes for a top-heavy film, with A-list acting receiving tenuous support from a C-list script.

Streep and Jones play Kay and Arnold, a fiftyish couple married for 31 years. Their last child having left home, their relationship is distant, almost wordless. Arnold has moved permanently into the guest bedroom, ostensibly because of a bad back and sleep apnea. Kay, mousy and bespectacled, makes some sad attempts to revive their sex life, but even her new blue negligee (do people still wear negligees?) fails to lure Arnold back to the marital bed. When their children ask what presents they exchanged for their 31st anniversary, Kay responds with embarrassment. “We got each other the new cable subscription!” Kay, who works at a clothing store, asks her friend Eileen (played by Jean Smart, who I would have liked to see in a bigger part) if she thinks marriages can be renewed. “You married who you married, you are who you are” is Eileen's no-nonsense reply.

But Kay is determined: “I want to have a marriage again.” She picks up a book by Dr. Feld (Carell), whose kindly therapeutic face reassures her from the cover of his book, “You Can Have the Marriage You Want.” Kay signs up for Dr. Feld's intensive counseling retreat at Hope Springs, spending her own $4,000 to enroll. Arnold, an accountant, objects strenuously, but eventually agrees to make the trip.

Arnold is a piece of work, a nasty, cynical S.O.B., but we can't help but agree a little with him that Dr. Feld's program seems like a bit of a racket. Every other visitor to the quaint seaside town of inns and lobster restaurants seems to be there for the same purpose. “The 10:30 with Bernie?” a diner waitress inquires knowingly. Sitting across from her grumbling husband, Kay looks enviously at a couple holding hands, who tell her they come back for frequent “tune-ups.” But the film's attitude toward expensive therapy retreats is not at all satirical. It's a straight-faced narrative about how Arnold and Kay get their groove back, with the help of the wise Dr. Feld. The lone moment of genuine comedy occurs when Arnold, at dinner with Kay, makes fun of Dr. Feld's sober, measured tones, imagining the doctor speaking that way while having sex with his wife.

I get a little tired of Meryl Streep's ubiquitous acclaim, but it can't be denied that she can really disappear into a role. She invests Kay with little gestures and vocal mannerisms that are unexpected and delightful. Because the movie's characters are from Nebraska, or the writer's idea of Nebraska, Streep gives Kay a soft, subtle Midwestern twang. “When was the last time you touched me that wasn't just for a picture?” Kay asks her husband during a counseling session, her pronunciation hovering between “picture” and “pitcher.” When Dr. Feld asks about her sexual fantasies – a subject on which he dwells to the point of prurience – Kay reflexively fastens the buttons on her demure flower-print cardigan.

Jones, in a role that was initially offered to Jeff Bridges, has the challenge of humanizing the curmudgeonly Arnold. Jones is always interesting to watch (especially the topographical map that is his heavily lined face), but the character is so rigid and irritable it's a wonder anyone, let alone the sweet Kay, could love him. Dr. Feld's prescriptions focus almost entirely on sex, but the narrative suggests that the couple's problems go beyond insufficient blow jobs (Kay at one time buys a bunch of bananas for practice) and into the realm of emotional abuse. Consider Arnold's estimation of Kay's intellect. When they first met in college, Arnold recounts, he was a teaching assistant in accounting and she was a student. What did he notice about her? “She was pretty, and she probably shouldn't be majoring in accounting.” Evidently that's why all she can do now is cook eggs and fold sweaters at the mall.

Taylor's ideas about what happens in an older marriage seem to be derived from television shows. Arnold gives Kay “practical” gifts rather than jewelry. She talks about boring things. He watches too much golf on TV. Oddly, the couple seem to be not just from Nebraska, but from Nebraska in the 1950s. She's scandalized by talk about sex, but they have cable, laptops and high-speed Internet, and presumably are of the Baby Boomer generation. Apparently the sexual revolution entirely missed the Cornhusker State. Do people who live on the coasts imagine Middle Americans still posing for American Gothic?

It is refreshing, however, to see a film that celebrates people of mature years. As the success of The Best Exotic Marigold Hotel demonstrated, there is a market for these kinds of films. A quiet chamber piece like HOPE SPRINGS is a good counterweight to the summer's dark and violent movie cacophony, as well as a chance to see two veteran actors deploy their considerable talents. Three stars.

Posted by Pamela Zoslov at 7:04 PM