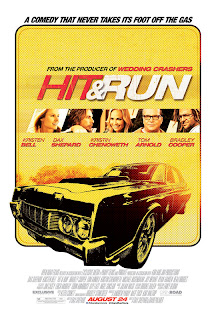 HIT & RUN, which Shepard wrote himself and co-directed with David Palmer (with whom he worked on 2010’s BROTHER JUSTICE), is a strange movie. I won’t say it’s quite the cinematic equivalent of someone waving at their mom from a merry-go-round… but it’s close. Shepard performed most of his own driving stunts, cast a crew of Hollywood buds plus his spouse – the button-cute Kristen Bell - and uses the narrative as much to grocery list and riff through his own comedic and cultural fixations as he does to tell an engaging filmic story.

Shepard plays Charlie, an affable loser who, after testifying against homicidal bank robber Alex Dimitri (Bradley Cooper) and his cronies, is permanently exiled to small-town America as a condition of witness protection. When his new girlfriend, Annie (Bell), gets offered a dream job in LA, home to the bad mamma-jammas he squealed on, he has to choose between lonely small-town purgatory and love (with a possible side of revenge murder). Playing out like a simpler, dumber IT’S A MAD MAD MAD MAD WORLD, Charlie and Annie  leave only to be pursued by a bumbling US Marshall (Tom Arnold),  Annie’s douchey ex-boyfriend, Gil (Smallville’s Michael Rosenbaum), two small town cops, and the vengeful murderers.

As someone whose never been a machine-head or clutch-face or whatever the automobile aficionados are calling themselves these days, the film’s diversity of cars and obsession with vehicular motion was nigh meaningless to me. I wouldn’t know a sweet ride if it ran over my cat. I can appreciate the rubber-burning acrobatics of a well-choreographed car chase and know the guilty adrenal satisfaction of watching a fast, heavy object play chicken with physics, but HIT & RUN’s car fixation comes from a much more adenoidal place – all engine revving and snorting machinery, slow-motion donuts and shock-testing desert pursuits.

All this to say, it’s less about the narrative of a chase, or the acrobatic potential of skilled pilots to make metal behemoths appear lighter than air, than it is re: the sheer loud bigness of cars… a celebration of wiener-swinging VROOM VROOM in deference to artifice that I’m not nearly macho enough to appreciate.

I do, however, usually enjoy comedy. And HIT & RUN has a whole scattershot pallet of jokey dialogue and slapstick buffoonery, much of it at the price of the already wafer-thin story. I will say this: props to Tom Arnold, who, whether by a feat of comedic skill or just sheer apathetic willingness, face plants his way through a gauntlet of physical and emotional humiliations while still managing to portray the most fully drawn character in the film - sweaty, clumsy, insecure, histrionic, unshakably dedicated to his badge, and, most importantly, relatable in a way that other characters - Cooper’s inscrutable, sociopathic bank robber for example – are not.

As for Shepard’s dialogue, much of it sounds like the outline for stand-up bits. It’s hard to take the bad guys seriously when they’re willing to indulge in endless asinine banter with their would-be foils. Conversations tend to veer swiftly into comedic vignettes, isolated from both the characters and the story. There’s a rant about cheap dog food, a bit about the use of the word “faggot” lifted almost directly from Louis C.K.’s Chewed Up special (sans humor and wit), a flaccid attempt at gross-out shock humor featuring elderly swingers, and an interminable riff on the race politics of anal rape. Paired with chest-puffed gangsterizing , much of it sounds like 14-year-old Seth Rogan attempting to emulate Tarantino.

I know… grumble, grouse, grump. I guess there is something mildly charming about the film - whereas other celebrities use passion projects as an excuse to wallow in their own overcooked political myopathy, Shepard’s content to jump cars off of ramps, BS with bros and make-out with his wife. Like Shepard himself, HIT & RUN's best bits boast a goofy, shaggy-haired affability that‘s unmaliciously simple.

The relationship plot, for example, hum-drum as it is, totally works. Shepard and his wife are (understandably) adorable together – her with her Veronica Mars snarkiness, him with his slackeresque nonchalance. Between all the down-shifting and casual cussing, there’s a passable, effortlessly organic romantic comedy here.

Were the movie content to remain an impassioned homegrown oddity, rather than a bafflingly inept mainstream action comedy, it would have a shot at winning me over. But, hey, clutch-faces… Cars! (2 out of 4 stars)
Posted by Matt Finley at 12:01 AM