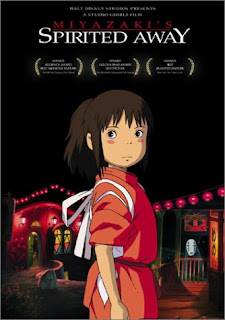 Seven feature films by Japan’s master animator Hayao Miyazaki will show between September 14 and October 28 at the Cleveland Institute of Art Cinematheque, 11141 East Boulevard in University Circle. The series, entitled “Spirited Away: Seven Films by Hayao Miyazaki,” includes new English-subtitled 35mm prints of the director’s greatest works, including MY NEIGHBOR TOTORO, CASTLE IN THE SKY, PRINCESS MONONOKE, and the Oscar-winning SPIRITED AWAY. Admission to each film is $9; Cinematheque members $7; age 25 & under $5 (with proof of age).
The series marks a homecoming of sorts, for it was the Cinematheque that first “broke” Miyazaki in Cleveland over two decades ago. (The theatre presented the local premiere of six of the seven movies in the retrospective.) “We’re thrilled to be bringing these magical and moving animated masterpieces back to Cleveland,” said Cinematheque Director John Ewing, “especially in newly-struck prints with subtitles, for earlier versions were often dubbed. Miyazaki has long been one of our biggest draws.”