Elles (August 10th and 11th at the Cleveland Cinematheque) 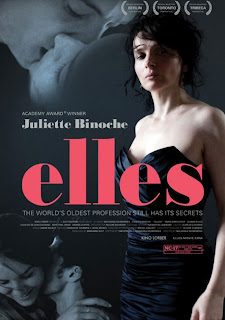 Its back-to-school time (or, if you're an American gun owner, Open Season), and while a college education in Ohio's no-jobs economy no longer means anything as far as material worth, the Cleveland Cinematheque is still on duty trying to provide University Circle youth reasons to fork over all that tuition. Case in point is Friday and Saturday's all-prostitution-international-movie double feature, right there on campus. In glorious Tramp-o-Rama, I guess. Programmers have paired an interesting, if lurid documentary WHORE'S GLORY, with - no not that Italian sexist omnibus of yesteryear THE OLDEST PROFESSION - but rather a Euro-flick prostitution drama with unimpeachable feminist credentials, ELLES.

If you mentally checked out of this review when you stumbled over the word "feminist," two things: you're probably a guy (or an uncommonly smart female) and you know where ELLES is going, pretty much into victimhood. Yes, guilty as charged, and if ever Match.com sets you up on a date with director Malgorzata Szumowska, don't say Charles didn't warn you.

Still, the picture is well acted, anyway, with cinema treasure Juliette Binoche - it now seems surreal to me she was in DAN IN REAL LIFE - almost but not quite succeeds in hagging herself down to portray Anne, a Parisian wife, mother and freelance writer. Anne  is working hard at an article for Elle Magazine about a couple of latter-day prostitutes of college age. One, "Lola," seems like a nice French co-ed who found that turning tricks earned her a lot more than student-level jobs, so now it's her prime source of income. The other schoolgirl-by-day-lady-of-the-evening, Alicje, is a shapely Polish exchange student who lost all her money and belongings upon arrival in Paris. Though given shelter by a friendly Arab immigrant, she's semi-estranged from her family and ekes a living in the expensive city via the sex trade, generally with fatherly, older guys (Lola's clientele seem more like her own peers).

The narrative of ELLES appears to cover a single day, though a rather confusing Alan Resnais-style mise-en-scene tends to break up the continuity with abrupt flashbacks and arbitrary cross-cuts and even a few fantasy sequences. Still, the point becomes clear after a while: all men are pigs, and in writing this story
on prostitution inspires a quiet domestic revolt in Anne, as she starts to view herself as a mere concubine,
used and taken for granted by her businessman husband and detestable sons. My oh my, how very 1970s Gloria Steinhem or Betty Friedan (and I happen to reading a book of Gloria Steinhem circa 1970s, so I
know what I'm talking about, beyotches). Nonetheless, it is true that I've looked into some vintage dictionaries of French slang, and zut alors! most of the jargon is indeed degrading nicknames for women. I mean, more than even the average rap song. So granted the culture maybe I shouldn't knock the movie that much. Maybe Juliette Binoche waits for the phone to ring these days, inviting her back to Hollywood to make DAN IN REAL LIFE II - DAN THE ZOMBIE SLAYER or something.

You know what's whack though? Back in the old VHS days, when I got paid a bit more to write movie reviews, I'd see this same plot all the time - as the launching-sanitary-pad for dozens of "steamy erotic thrillers." Remember those? Generally direct-to-video sleazies, largely starring Playboy centerfolds named Shannon, they commonly involved an initially demure heroine who starts to write an article about the local red-light district, goes for ride-alongs with enticing whores and strippers and "explores the darkest secrets of her own sensuality," as the ad copy invariably went. By the end Shannon would experience a radical change in her outlook (and lingerie), with a trifling note of peril injected via a serial-killer mystery subplot - just to add the proper "thriller" element and keep the thing from being sheer softcore. If only Cleveland screenwriter Joe Eszterhas had a good enough lawyer to sue for plagiarism over all the steamy-erotic- thrillers he'd be the one buying the Browns right now.

Anyway, my point is, same damn premise as ELLES, but this drama definitely takes the high road (even so, expect sex scenes worthy of a Oui photo spread). Nonetheless, it was a sense of déjà vu for me, as the French say.

And, despite the stale feminism, despite my nomination for week's worst date flick (at least in DARK KNIGHT RISES couples can share a moment of closeness cowering from the hail of bullets) ELLES provides a worthy lesson for the young women of today's University Circle class of 2012, 2013 and beyond: that if you're lucky enough to be as attractive as Lola, Alicje or even Juliet Binoche, there's still a way you can keep up with the interest payments on those student loans, and you can even do it lying down! School is in session... (2 1/2 of 4 stars)