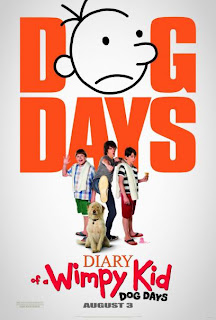 Leaving behind the confines of school for the wider world of possibilities that summer vacation opens up, DIARY OF A WIMPY KID: DOG DAYS is nonetheless still pretty much the same movie as its two predecessors. Once again Greg Heffley (Zachary Gordon) is at heart a good kid who gets into trouble by trying to be someone he's not and lying to cover up when his plans backfire. His older brother Rodrick (Devon Bostick) does his best to make life for Greg miserable while the boys' parents (Steve Zahn and Rachael Harris) remain largely clueless. Robert Capon is back as Greg's nerdy but nice best pal Rowley, and Peyton List returns as well as Holly Hills, the girl Greg has a crush on and frequently embarrasses himself in front of. In the end, Greg learns one more time that honesty is the best policy.


Aside from the feeling of deja vu the film engenders, it also feels more disjointed than the previous two entries. Whether that's the result of trying to fit two books into one screenplay, lackadaisical filmmaking, or just the fact that with the freshness gone, such flaws stand out more, the fact is the movie just doesn't flow very well. Fortunately the cast are as winning as always, and scenes like the one where youngest Heffley son Manny (Connor and Owen Fielding) gives himself a bath in a urinal using the deodorant cake as soap still deliver on the kind of juvenile gross-out humor every 12 year old (and 12 year old at heart) finds is hilarious.

DOG DAYS is arguably as good and contains about as many laughs as the previous entries, but it's impossible to deny that the series is beginning to feel stale. Of course, that hasn't hurt sales of the books these movies are based on, so most likely that's not nearly as bothersome to the movie's target audience of middle school-age kids as it is to this middle aged critic. For them, the fact that the settings and some of the situations in DOG DAYS are new is novelty enough. Who cares if the characters haven't grown in the slightest over the course of the series, or that a lot of the jokes feel recycled? For kids, familiarity doesn't breed contempt; it's comforting. 2 1/2 out of 4 stars.