[ABRAHAM LINCOLN VS. ZOMBIES is now available on home video.] 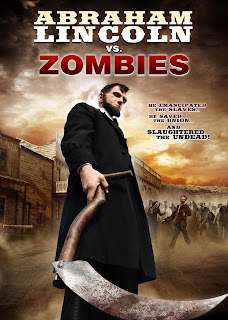 Practice may not always make perfect, but if you do something often enough, chances are you'll at least improve. That seems to be the case with straight to video specialists The Asylum. The company carved out a niche for themselves as producers of what many dismissively refer to as “mockbusters”, cheap rip-offs of big budget Hollywood epics. Their early efforts were pretty awful, but the recently released ABRAHAM LINCOLN VS. ZOMBIES, clearly meant to ride on the coat tails of the recent historical action/horror hybrid ABRAHAM LINCOLN: VAMPIRE HUNTER, is actually more enjoyable than its inspiration.

The plot synopsis is contained in the title, but for those who need more, here's the skinny: A Union force sent to capture a Confederate outpost is massacred by zombies, the sole survivor returning to tell the tale before joining the ranks of the walking dead himself. President Lincoln (Bill Oberst Jr.) is familiar with zombies, having encountered them as a child when they killed his parents and puts together a special team that he himself will lead to wipe out the undead menace. Various other historical personages show up, including Stonewall Jackson (Don McGraw), Pat Garrett (Christopher Marrone), a young Teddy Roosevelt (Canon Kuipers), and a certain actor named John (Jason Vail). Our 16th President also gets a fictional “lost love” turned prostitute named Mary Owens (Baby Norman) who joins the fight against the walking dead along with her daughter Sophia (Hannah Bryan).

The special effects, makeup, costumes, and sets may be a little threadbare, but director Richard Schenkman (who also made the worthwhile sci-fi sleeper THE MAN FROM EARTH and a few Playboy videos) does a good job keeping viewers from noticing his film's shortcomings with plentiful action and a light tone. Having a fairly solid cast doesn't hurt, either. No one is going to win an Oscar for their performance here but everyone is at least competent, with Oberst in particular standing out in the lead role. Adding to the fun are some clever twists both in regards to American history and undead mythology (the zombies in this film “sleep” until someone makes noise or directly disturbs them). It's by no means great, but everyone involved does the best they can with what they have to work with, neither taking themselves too seriously nor descending into self parody. If you want a movie where Abe Lincoln kicks living dead ass, this is the one to watch. 2 1/2 out of 4 stars.
Posted by Bob Ignizio at 12:00 AM