Abendland (August 17th and 18th at the Cleveland Cinematheque) 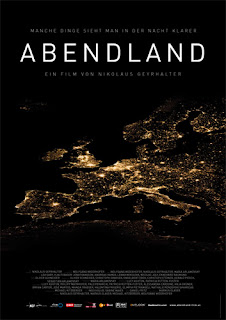 While most people are at home in bed, there is a whole other night time world that comes to life. In ABENDLAND, we get a look at some of that nightlife in Europe. Security guards watch surveilance cameras; a premature baby is cared for at a hospital; European politicians meet and squabble; paramedics deal with a bunch of rowdy drunks at a beer garden; the Pope gives a speech; police officers train; people have sex on camera for online viewers; a group of protesters having a party get busted by the police. All these and other scenes are presented in short chunks without music or commentary.

There are recurring themes – surveillance comes up more than once, and the ways technology is used for both good and ill is explored throughout. Still, exactly what the movie means to say about these things isn't always clear. Some critics see director Nikolaus Geyrhalter's film as a critique of modern society and technology, and they may well be right. Certainly some segments seem to support that viewpoint, but there are too many others that don't. Then again, maybe they're reaching too far. Maybe this is just a dispassionate document of what goes on in Europe at night, and any slant to be found is in the eye of the beholder.

Far too many documentary filmmakers these days feel the need to insert themselves directly into their films or find other ways to tell viewers explicitly how they should think about what they're watching. That ABENDLAND rejects this approach is refreshing, but it does so by going to far in the other direction. Some of the segments are undeniably fascinating, but as a whole the film is too vague, too close to being just a collection of random film clips presented in a matter of fact way, tied loosely together by the fact that they all take place at night in Europe. 2 out of 4 stars.
Posted by Bob Ignizio at 12:01 AM