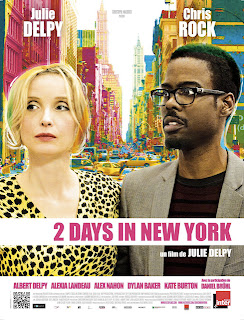 “There just aren't enough quirky indie films about self-absorbed artist types living in New York,” said no sane person ever. Nonetheless, star/co-writer/director Julie Delpy has made another one with 2 DAYS IN NEW YORK, a sequel to her 2007 film 2 DAYS IN PARIS. Don't worry if you missed the prior 2 DAYS; everything you need to know is capsulized in a puppet show introduction.

The film is essentially an arthouse version of something like MEET THE PARENTS. Fine art photographer Marion (Delpy), her live-in writer/talk radio host boyfriend Mingus (Chris Rock), and their two children (each from previous relationships) are preparing to host a visit by Marion's family who have flown in from France: her widower father Jeannot (Albert Delpy), her sister Rose (Alexia Landeau), and, unexpectedly, Manu (Alexandre Nahon), a past boyfriend of Marion's who is now dating Rose.

The tensions begin from the moment Marion's family arrives at the airport, with Jeannot being held at customs for a rather unusual attempt at smuggling. Marion's sister takes every opportunity to get under her skin, and Manu is just a complete moron. Meanwhile, Marion is also trying to prepare for a gallery show in which the centerpiece is a conceptual piece consisting of a contract selling her soul to the highest bidder. All the stress causes Marion to become flustered, tell outrageous lies, and generally behave in a ridiculous manner while Mingus grows increasingly irritated with her and her family.

It's a fairly scattershot affair, with some parts connecting on a real emotional level while others feel contrived. There's a steady stream of jokes, many of which are gleefully tasteless, but about as many fall flat as hit their mark. There is at least one bit involving the stunt casting of a famous actor/director/fashion model that was especially funny, and I really enjoyed Chris Rock's performance. Even with my prejudices, I laughed enough that it didn't seem like my hour and a half was completely wasted. I just didn't laugh enough to give the film a complete recommendation. If you're not quite as sick as I am of watching urban hipsters stressing out over problems that, in the greater scheme of things, are pretty insignificant, your reaction to 2 DAYS IN NEW YORK might be more positive. 2 1/2 out of 4 stars.
Posted by Bob Ignizio at 12:01 AM