You can cyber-bully the Batman at the Akron Public Library, July 12 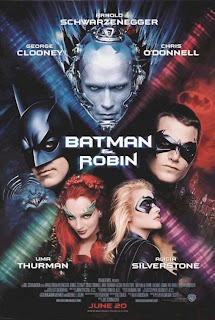 Things may look bright here at the Cleveland Movie Blog, with our purchase of the Erieview Tower for $1 in a foreclosure auction, Toledo's own Katie Holmes leaving Tom Cruise for us, and good notices for our erotic novel Eleven Shades of Gray (Downsized in Cleveland From Fifty Shades). But behind the scenes it's all backstabbing and betrayal like in any other local media. Example: Bob Ignizio assigned me to do a piece reflecting upon the most despised Batman adaptation this side of Arkham Asylum, 1997's campfest BATMAN & ROBIN, which shares some super-characters with the upcoming superhero blockbuster THE DARK KNIGHT RISES.

But I'm not. I've got a book deadline, mortgage woes, other assignments that might even pay a little money - and anything I might say about BATMAN & ROBIN will already be said - and shown - much more entertainingly, at the Akron Public Library's Main Branch on July 12 at 6:30 p.m.

That's when the library will screen BATMAN & ROBIN digitally, with one added bonus that gives digital-projection a decided advantage over analog-celluloid. Thanks to computer wizardry that Warner Bros. executives of 1997 could never have imagined, viewers with text-messaging mobile devices will be able to do a Mystery Science Theatre/Rifftrax deal, live. During the picture viewers can text-message their comments, gags and insults to a special account. And the words will appear onscreen, like subtitles.

Sample: "THESE BATMAN, ROBIN COSTUMES HAVE NIPPLES. BATGIRLS DOES NOT. OMFG!"

For you 21st-century kids who don't even know that there were Jokers before Heath Ledger, the Joel Schumacher-directed BATMAN & ROBIN, in its time, represented an enormous (but perhaps Hollywood-kitsch inevitable) Bat-reversal 180-degrees from the strikingly operatic Tim Burton Batman pictures and Frank Miller's ultra-serious "Dark Knight" graphic novels. Yes, the tag-team of Batman, Robin and Batgirl vs. Poison Ivy, Mr. Freeze and Bane got away from the dark, brooding psychotic Batman of the 1990s, and went right back to the silly Batman of the 1960s. An over-the-top orgy of the sort of nerdcore exaggerations, pun-strewn dialogue, awful science, bad astronomy, impossible physics and gaudy color that gives  the superhero comics a bad name (at least for me, and, I strongly suspect, Adam West).

One critic called BATMAN & ROBIN a "gay FANTASIA" and didn't mean it in a good way. George Clooney could turn in Oscar-worthy performances in every outing and he'd still have to apologize for his Bruce Wayne at every Comic-Con.

Oh sure, there are some moments in which (as in Mike Hodge's FLASH GORDON) the cartooniness touches genius. Uma Thurman as Poison Ivy making her musical archvillain entrance in a takeoff on Marlene Dietrich's gorilla-costume striptease in BLONDE VENUS - now that's weirdly brilliant. Even though it's so gay I think Westboro Baptist Church membership spiked with it. Most of the rest of Joel Schumacher's, er, vision recalls what THIS IS SPINAL TAP said about the fine line between clever and stupid. Mr. Freeze has an evil hockey team as henchmen? One played by...rapper Coolio?

If the genesis of BATMAN & ROBIN were a Justice League story, superheroes would dedicate the rest of their careers fighting for truth, justice and the prevention of further superhero movies. And Lex Luthor would start a film studio.

This is the first time the Akron Public Library has done an audience-interactive mockery of this nature (I'm told they got the idea off the Web), so how it will go is anyone's guess. I entreat the Cleveland Movie Blog readership to call off your dead-end night jobs (I know I sure can't afford to) and head down to Akron with your handhelds charged and wits sharper than the Riddler's. It's free to the public and, whilst initiated under the Teen Programs division, it is indeed open to all ages. Note, though, that the usual policies applying to a PG-13-rated film will be applied; any Boy Wonder under 13 must be accompanied by parent/guardian.

(Frankly, in the case of BATMAN & ROBIN, they should have restricted viewing by anyone over 13, but that's just me.)

For more information call the Akron Public Library at 330-643-9000. The website is www.akronlibrary.org. The Main Branch is located at 60 S. High St. in downtown Akron.
Posted by Charles Cassady Jr. at 12:00 AM