Worried About the Boy (now on video)

[WORRIED ABOUT THE BOY is now available on home video.] 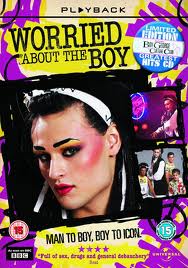 The latest crisis in my marriage, leading to the day my wife flees me for Scientologists? A familiar complaint, dating all the way back to when I wrote blurbs for the Cleveland International Film Festival. Back then I naturally had no girlfriend, so when the loneliness became unbearable I'd load a bunch of review copies into the Chrysler and take them to my parents' to share. And after a while my father would be appalled and turn to me and ask, "Charles...why do they make YOU watch all the gay movies?"

He was right. Any given review gig I had (except when I ghostwrote a book about children's movies), it seemed I would end up the go-to guy for homosexual content. I wasn't gay myself, and some of these same media operations had gay staff. But when it came to apportioning out articles to write about LGBT cinema, the er, honor fell to me.


I had to watch them all. The coming-out-of-the-closet dramas. The AIDS tragedies. The hand-ringing documentaries about how homosexuals were being discriminated against in the Boy Scouts, the military, Starfleet, the Green Lantern Corps, anti-gay hate groups etc. I was always the one to watch them. Except BROKEBACK MOUNTAIN; guess that was too important. And HEDWIG AND THE ANGRY INCH; I think the music critic wanted that.

Hey, it was a paycheck - freelance, of course, and in no-jobs Cleveland I needed every one of those I could get. Maybe for being a good soldier I'd eventually get rewarded with full-time employment and a salary (but I never was).

I tried to make a joke of it with my dad. I'd arrive and tell him, "I've got three more Film Festival movies to screen. One's titled GAY. The other's called MORE GAY. The third one's called GAY GAY GAYYYYYYYYYY!!! My relationship with my emasculating first girlfriend didn't last long enough for this issue to become the deal-breaker, I think, but it would have eventually contributed. "Why is Charles always watching gay movies?" Ultimately she would've written and illustrated a tell-all book called King of Denial: How I Accidentally Dated the Most Pathetic Secretly Queer Man in America But I Finally Figured Him Out Via His Taste in Movies.

Knowing her, she would have sued Terry MacMillan for plagiarism, too.

Of course, I know perfectly well why, besides desperation for money, Charles Had To Watch All Those Gay Movies. In every situation I've always been near the bottom-rung of the editorial food chain, and I had to take whatever pieces the other, more respected writers didn't want. Meaning gay movies.

And in the end, the inevitable outcome solved the problem, mostly. As the least valued name in the newsroom I was the most disposable. For all my hard work I would be laid off when the freelance budgets were cut, the page counts dwindled, the papers went out of business, a new editor came on board with her own pet freelancers, or whatever. One way or another I lost the Film Festival gig and most all my publishers. And just in time to miss MILK, I NOW PRONOUNCE YOU CHUCK AND LARRY and I LOVE YOU PHILIP P. MORRIS.

Well, there's actually one more publisher I did pick up who remains with me, an obscure trade journal published way out of town, read by few. And lately it's been sending me...a lot of gay movies.

The one that finally got my wife angry ("Why are you always watching gay movies? What are they trying to tell you?"). It's called WORRIED ABOUT THE BOY, a less-than linear biopic of 1980s pop star Boy George.

This source material was already depicted in a flop Broadway song-and-dance extravaganza, infamously backed by Rosie O'Donnell around the time the onetime "Queen of Nice" deep-sixed her namesake magazine (nice to remember there are other unemployed writers out there beside me). Here the same inspiration finds its footing in a mostly sad BBC dramatization.

It underscores that while Boy George and his uptempo tunes with the band Culture Club peddled a non-threatening, gender-bending image to the masses, one that broke some significant cultural resistance, offstage things weren't so absolutely fabulous. The narrative shuttles back and forth between two timelines. Most of it is the unknown George O'Dowd (Douglas Booth), son of a loving but bewildered working-class Irish household. With Quentin Crisp as a guiding light and David Bowie as a hero, he explores outlandish fashion and sexuality whilst subsisting on the seedy, if glam-ish fringe of the 1970s post-punk scene in London.

George gets his heart broken a few times (nothing too visually explicit, if you must know, just gents kissing), a situation that doesn't improve when the storyline leaps ahead to the downward-spiraling pop star Boy George in the 1980s. Now he's dwelling in a mansion, but George is no happier and remains dogged by the press and rumors of drug addiction. Both before and after stardom George aches for true love, but is disappointed in both promiscuous homosexual males and the self-proclaimed straight men nonetheless attracted to George's androgyny.

Those expecting juicy music gossip might get a small fix provided by the creepy depiction of the late impresario Malcolm McLaren, who states that he only puts trendsetting bands like the Sex Pistols together to sell clothing. The foppish fiend likes George's look - not his minimal singing talents. He recruits O'Dowd briefly for the group Bow Wow Wow, but other bandmates don't accept the newcomer, and after one photo shoot George is unceremoniously expelled. The humiliation inspires him to pull together with a rainbow-colored assembly of other performers to form Culture Club, and the rest is history, or at least the 1980s.

A climactic Top of the Pops performance of "Do You Really Want to Hurt Me?" does achieve the effect of giving that hit tune more of a emotional impact for the viewer than it may have ever had on the dance floor. The real George O'Dowd supposedly gave his blessing and advice to the production as long as Booth didn't portray him as "camp," which he assuredly does not. There's no post-Thatcher update on George and his activities, which I'm given to understand have involved occasional scandal, film acting and writing (and being Rosie O'Donnell's muse).

Well, one thing's for sure. If Mr. O'Dowd and myself ever wound up being movie reviewers for the same publication, and there was a gay movie to be done, he'd probably defer it to me. (2 1/2 out of 4 stars)

[UPDATE: Since this piece was written, Charles Cassady received a review copy of a homoerotic Japanese-animated cartoon. Aieeeeee!
Posted by Charles Cassady Jr. at 12:00 AM