[Press release from the Cleveland Cinematheque.] 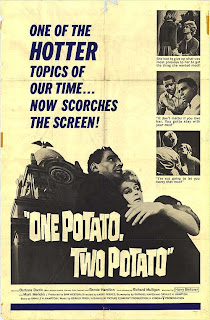 Filmmaker Larry Peerce returns to Northeast Ohio almost 50 years after shooting his groundbreaking debut feature, ONE POTATO, TWO POTATO  in Painesville. The 1964 film, a prizewinner at Cannes, was the first American movie to deal with interracial marriage.

Veteran Hollywood filmmaker Larry Peerce, who directed over 50 movies and TV shows in a career that spanned five decades, will appear in person on Saturday, August 4 at the Cleveland Institute of Art Cinematheque, 11141 East Boulevard in University Circle. Peerce will present two of his earliest, and best, feature films: the shot-in-Painesville ONE POTATO, TWO POTATO (1964) at 5:30 pm and the 1967 New York subway thriller THE INCIDENT at 8:00 pm. He will answer audience questions after each movie.

“Given his historic connection to northeast Ohio, we have long wanted to bring Mr. Peerce to Cleveland,” said Cinematheque Director John Ewing. “These special shows also mark the Cinematheque’s 26th anniversary at the Cleveland Institute of Art.” Admission to either program is $9, Cinematheque members $7, ages 25 & under $5 (with proof of age). Those over 25 can see both programs for an additional $7.

Larry Peerce was born in 1930 in the Bronx and is the son of Metropolitan Opera star Jan Peerce. Among his many works are the feature films GOODBYE COLUMBUS, THE BIG T.N.T. SHOW, and THE OTHER SIDE OF THE MOUNTAIN and episodes of TV’s Branded, Batman, and The Wild Wild West.

ONE POTATO, TWO POTATO, which was shot in Painesville almost 50 years ago, was Peerce’s debut film. The first American movie to deal with the subject of interracial marriage, it is a landmark American independent film. Barbara Barrie plays a divorced woman who marries an African American man (Bernie Hamilton), then finds herself embroiled in a nasty child custody case with her racist ex-husband (Richard Mulligan). Barrie won the Best Actress prize at the Cannes Film Festival for her performance. African-American film historian Donald Bogle writes that ONE POTATO, TWO POTATO “led the way for such major-studio studies of the interracial marriage-romance in A PATCH OF BLUE and GUESS WHO’S COMING TO DINNER.”

THE INCIDENT is the movie Larry Peerce is proudest of. It is a harrowing tale of two young punks who terrorize the passengers of a NYC subway car. The large  cast features Tony Musante, Martin Sheen (making his screen debut), Beau Bridges, Brock Peters, Jack Gilford, Thelma Ritter, Ruby Dee, and Ed McMahon. Many of the scenes were shot secretly in the NYC subway system after the New York Transit Authority denied permission to film there. The film will be shown in a 35mm print from the Twentieth Century Fox studio archive.

For further information about these this special evening, call John Ewing or Tim Harry at (216) 421-7450.