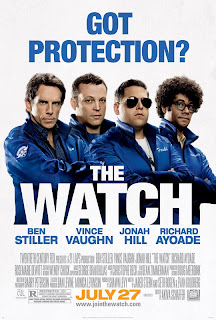 At the very least, THE WATCH, directed by The Lonely Island’s Akiva Schaffer (HOT ROD), is sit-throughable.

Originally written by Jared Stern as a family-baiting PG-13 sci-fi comedy, the film was later re-worked into a hard-R lead-ventilated cuss generator by SUPERBAD scribes Seth Rogen and Evan Goldberg. Certainly far less sci-fi than a connect-the-dots buddy comedy, the film lurches between the sentimental and the profane, offering plenty of comfy sit-com-recycled domestic drama as a veritable cavalcade of dick jokes tumble out beyond the point of diminishing returns.

And, yes, there are a few aliens. They look sort of like nude, off-brand Predator blow-up dolls. They show up maybe three times in limp action sequences between long stretches of intermittently funny  improvs and plot points that vacillate between completely off the wall and exactly out of that last movie you saw where a bunch of dudes hang out and have an allegedly zany adventure.

It kicks off with a grisly murder – the flaying of a Costco security guard. While most of the McMansion-dappled housing development languor on through pool parties and high school football games, Evan (Ben Stiller), a manager at Costco and notorious local busybody, vows to hunt down the killer. So he forms a neighborhood watch alongside the only three other people who seem even mildly interested in bringing the violent, marauding murderer to justice – Bob (Vince Vaughn), a lonely, (mostly) single dad, Franklin (Jonah Hill), an unhinged police academy drop-out, and Jamarcus (The IT Crowd’s Richard Aoyoade), a comically stoic, undersexed divorcée. As Bob tangles with his pubescent daughter and Evan evades the ovulating advances of his neglected biological time bomb of a wife, the three uncover an alien plot to overthrow Earth.
Stiller is in full type-A mode here, lording over the watch like a Midwestern version of Greenberg – all the frustrated neuroses and emotional constipation with none of the cynicism. Vaughn is an anemic, less abrasive version of how I imagine Vince Vaughn might just… kinda… be. Meanwhile, Hill’s character – a hyperactive wanna-be cop who’s armed to the incisors and living with his haggard mom – is the Saturday morning cartoon version of Rogen’s Ronnie Barnhardt in OBSERVE AND REPORT.

Though it’s interesting to watch a toned-down Vaughn, whose character, for once, serves as the moral center of a film, its Aoyoade who really shines. Collapsing some shamefully oversized comic writing into a deceptively cool and understated performance, his character, if even just for reasons of sheer tonal contrast, is certainly the film’s best. (By the way – what’s up with this over-qualified British comedian side-kick trend? see HALL PASS and BRIDESMAIDS for other recent examples…)

Speaking of Brits, anyone expecting anything akin to Joe Cornish’s brilliant and hilarious (also, in light of the Tottenham riots, eerily prescient) ATTACK THE BLOCK may want to down-shift their anticipation. Even ignoring THE WATCH’s exile of its genre elements to the farthest back burner, and it’s predilection for lazy crotch gags, I couldn’t help but notice the stark socio-cultural differences between the two. If ATTACK THE BLOCK  - a film in which a group of underprivileged British teenagers defend their housing project against a (significantly better designed) alien threat – is about consciously rising above the societal predestination perpetuated by both sides of the class divide, THE WATCH sits lethargically in the  middle (well, upper-middle), portraying an insular slice of oblivious Americana. They’re bored consumers who immediately default to violence as a means by which to protect and, ultimately, reinforce their unselfconscious privilege.

I understand that the main characters are meant to seem heroic because they have the wherewithal to break away from their La-Z-boys long enough to question the cost of navel-gazing comfort, but it ignores the pitfalls of the other extreme – middle-class paranoia and the self-destructive ignorance of jingoism. Just look at the tragic Trayvon Martin shooting that forced harried marketers to change the film’s title from NEIGHBORHOOD WATCH.

I couldn’t help but recall Joe Dante’s THE ‘BURBS, a darkly comedic re-working of REAR WINDOW that finds Tom Hanks’ suburban stereotype obsessed with his odd  new neighbors and their bizarre nocturnal activities. Despite the fact that THE ‘BURBS is superior in both its skewering of modern cul de sac living and its ability to build suspense through comedy, both films make the mistake of concluding that, while lurking threats to our lifestyle may dwell, unseen, amongst us, those threats are geographically (THE WATCH) or ideologically (THE ‘BURBS) foreign.

Even as Stiller and his posse bust caps through a legion of insectoid interlopers, there are much more insidious threats – menaces endemic to the very  lifestyle they are defending - that, unchecked and unmonitored, continue to gnaw at the foundations of the suburban idyll.  I’m not suggesting they should’ve mounted a polemic on unemployment, carbon emissions, public education or even bath salts, but, c’mon – a paranoid, gun-toting militia, a corporate big box store and a couple grumpy aliens... and we’re supposed to be most concerned about the aliens? (2 ½ out of 4 stars)
Posted by Matt Finley at 12:01 AM