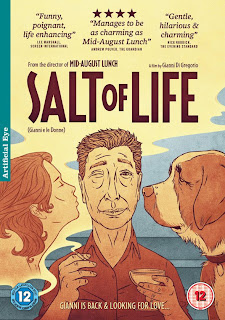 Early retirement isn't all it's cracked up to be for 60 year old Gianni (Gianni Di Gregorio). His mother (Valeria De Franciscis) thinks nothing of calling him on the phone feigning illness just to get him to adjust the antenna on her TV set, his wife (Elisabetta Piccolomini) barely acknowledges he exists, and his daughter (Teresa Di Gregorio) is dating a loser (Michelangelo Ciminale) she plans on dumping soon, but who for the meantime is freeloading at Gianni's home. Gianni's lawyer friend (Alfonso Santagata) suggests that he get out of his rut by taking up with a mistress, but that proves easier said than done.

Di Gregorio, who also wrote and directed THE SALT OF LIFE, is a gifted comic actor with a deadpan style of acting similar to Buster Keaton's. We probably shouldn't be on his character's side, but his sad puppy dog looks and likability help mitigate his caddish behavior to some degree. Besides, Gianni fails so spectacularly in his efforts at adultery that it's not too hard to feel a little sorry for the would-be philanderer.

Despite the film's glib attitude towards infidelity and lots and lots of shots of cleavage and tight tops as Gianni ogles nearly every female that enters his line of sight, to call it sexist wouldn't necessarily be fair. Gianni's mother certainly comes off as a bit of a stereotype, but his wife is never depicted as a shrew; at worst, she simply views her husband asexually as something along the lines of a pet or a child that needs to be taken care of, which given what we see of Gianni sounds about right. Even the women Gianni objectifies, when he actually works up the nerve to talk to them, prove as well rounded as their figures. And the butt of the film's jokes is always Gianni, never the women.

There aren't a lot of huge laughs in THE SALT OF LIFE, but there's a steady stream of light chuckles and mild guffaws. As a director, Di Gregorio has a fairly simple, straight forward style. His strengths are a great sense of comic timing and an obvious love for his characters, flaws and all. The ending isn't entirely satisfying, but at least Di Gregorio is smart enough to keep things moving at a light and breezy pace and not let his film overstay its welcome. 3 out of 4 stars.