The Love God? (July 19th and 20th at the Cleveland Cinematheque) 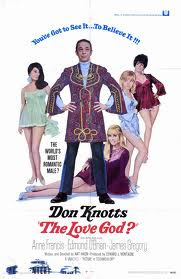 Some screen comedies failed in their era because they were way ahead of their time. The Marx Brothers' DUCK SOUP is one. And while it doesn't show up in ten-best lists or deified by Woody Allen, THE LOVE GOD? is another. Damned in its day, listed in the 1980s on some overpaid critics' Worst-of-All-Time lists, this 1970 Don Knotts vehicle has finally won some belated fans who have gotten it scattered revival screenings. Of course, if anyone had listened to me - and they didn't - it would have been common knowledge decades ago that Don Knotts stars in the best family comedy ever made...about the pornography industry.


Hugh Hefner was the clear inspiration, though Larry Flynt may be the name that pops into the minds of most Ohioans (because they're smart or pervs). When government prosecutors crack down on porno publisher Osborn Tremain (Edmond O'Brien) and his foldout-centerfold wife, the sleaze baron has to find a front man to be the new publisher of his dirty-magazine business. He discovers Abner Peacock (Knotts), the gangly editor/owner of a failing birdwatching journal. With an infusion of Tremain's money - which is also mob money - Peacock Magazine goes from birds to broads, and the straightlaced Abner is given a full-on Playboy makeover as its highly public Hef-like figurehead.

Director Nat Hiken deploys much the same gaily-colored style and production values set by earlier comedy meastros such as Frank Tashlin and Norman Taurog (and Jerry Lewis). It looks just like Knott's other kid-safe Universal comedies like THE GHOST AND MISTER CHICKEN and THE SHAKIEST GUN IN THE WEST, but uses the type of wink-wink-nudge-nudge sexual innuendo humor that would take Fox sitcoms like Married...With Children 25 years to bring into living rooms. Even so, there's a sweet center that the Bundy's generally didn't have. Still, critics and the Catholic League called THE LOVE GOD? filth upon its release. Now that cult status beckons I still hope the comedy remains mostly an exclusive to us Peacock Magazine lifetime subscribers. It just wouldn't be the same as an overhyped modern remake starring...I just can't imagine who, actually. Knotts was pretty much in a class by himself (though I fear that won't be enough to spare us the $200 million INCREDIBLE MR. LIMPET redo Hollywood keeps threatening).

Of course, Knotts did bring a bit of the blue humor with him when he succeeded Norman Fell's Mr. Roper as the landlord on Three's Company. Nobody paid any attention to me over THE LOVE GOD?'s sterling qualities before, and nobody will with this, but it would be cool to pair this movie up with either A FACE IN THE CROWD or PRAY FOR THE WILDCATS, two pictures in which the late Andy Griffith portrayed despicable guys. Call the double-header "Mayberry After Dark." (3 out of 4 stars)