[TAKE THIS WALTZ opens in Cleveland on Friday July 20th exclusively at the Cedar Lee Theatre.] 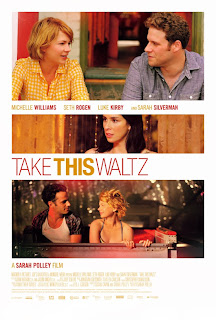 New love can be thrilling and passionate, but as one older but wiser woman says in Sarah Polley's dramedy TAKE THIS WALTZ, “new gets old.” However, logic and wisdom tend not to matter much to those freshly under the sway of amore.

While visiting a historical site, travel writer Margot (Michelle Williams) has a “meet cute” with Daniel (Luke Kirby), a handsome artist/rickshaw driver (yes, really, a rickshaw driver). On the plane home the two find themselves seated next to each other, and as they talk it soon becomes clear there's a romantic spark. As if this weren't indication enough of fate at work, it turns out the two actually live across the street from each other. There's just one giant obstacle preventing them from leaping headlong into romance: Margot is married.

Margot's husband Lou (Seth Rogen) is a nice guy who truly loves his wife and shares her twisted sense of humor, but five years into their marriage there isn't much passion. Lou is too wrapped up with tweaking the recipes for his all-chicken cookbook to notice his wife's dissatisfaction. So despite saying how much she hates and fears being caught in between things, Margot spends a good hour and a half of the film agonizing over whether or not to leave Lou. Of course she does eventually make a decision, and the ramifications of that lead to the film's ironic punchline.

With her second feature, actress turned writer/director Sarah Polley is clearly having fun playing with and against the usual clichés of romantic movies. Up to a point it's fun for the audience, too, but eventually it all just starts to feel a little too clever, a little too forced and artificial. The same is true of the excessive quirkiness of the characters. Maybe that was supposed to be played for laughs, too, but if so it's done in such a deadpan way that it's hard to be sure what Polley's intent is.

There's no issue with the performances - Michelle Williams is excellent as always, and Rogen dials it down to give a real performance for a change. Polley, whose previous film AWAY FROM HER is a criminally underseen masterpiece, once again shows a solid grasp of technique and style, and the parts of TAKE THIS WALTZ that work, work well. The way the pieces are assembled, however, feels clunky. There are a lot of interesting ideas and observations here about love, its depiction in popular culture, and how that reflects back on real life creating unrealistic expectations, but it falls short of being a completely satisfying film. 2 1/2 out of 4 stars.