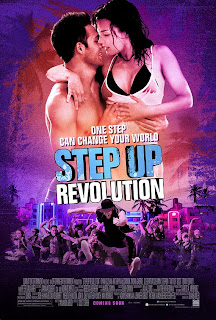 STEP UP REVOLUTION utilizes the tried and true plot about a group of rebellious but basically good kids just trying to do their thing without being hassled by “the man”. In this case, their thing is staging elaborate performance art flash mobs that would obviously require far more in the way of money and resources to pull off than we're supposed to believe these kids have, but never mind that. And never mind the fact that, even if they did have the money and resources, they'd probably get arrested.

As far as plot specifics, hotel waiter Sean (Ryan Guzman) leads the flash mob, with his best friend Eddie (Misha Gabriel) as his right hand man. Along with the rest of their crew, creatively named The Mob, they're among the top 10 contestants in an internet video contest with a $100,000 prize. Alas, trouble swoops in from Cleveland in the form of hotel magnate Bill Anderson (Peter Gallagher). He plans to tear down the neighborhood where the Mob and their friends and families all live to put up a spiffy new development. Along for the ride is Anderson's pretty daughter Emily (Kathryn McCormick) who, wouldn't you just know it, just wants to dance. She winds up falling for Sean and joining the Mob, keeping her family ties secret from everyone but Sean at Sean's insistence.

This of course sets up the inevitable third act conflict when misunderstandings drive a wedge between the three leads, which as played out is easily the most contrived aspect of this formulaic but fun script. The split also causes the Mob, minus Sean and Emily, to behave in an uncharacteristically destructive manner that might have gotten then not just arrested, but shot in real life.

There's some attempt to latch onto the vibe of the Occupy movement, with the Mob transforming from a group just trying to win a contest into one trying to protest the greedy corporation that wants to destroy their home, so if you hear the usual chorus of wing nuts saying this movie has a liberal agenda, they're actually more or less right this time. Of course the movie manages to undercut that message at the very end in the way the Mob gets rewarded (what, you thought they weren't going to come out on top?), but it's not like anyone is going to go see this movie for its political message.

No, What matters is that we get to see attractive young people in imaginatively choreographed dance numbers. There's music, romance, action, and, since the story is set in Miami, the outfits worn by the cast show a fair amount of skin, giving the tweens and teens who make up the target audience ample PG-13 beefcake and cheesecake to ogle. In short, the movie delivers what its audience wants. Don't take my word for it, though. As I was walking out of the theater, one teenage girl turned to her friend and exclaimed, “that was the best movie ever!” I won't go that far, but it was considerably more entertaining than I expected. 2 1/2 out of 4 stars.
Posted by Bob Ignizio at 12:01 AM