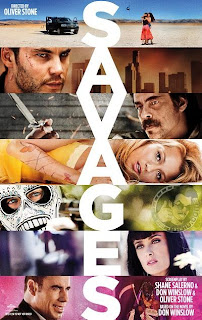 Although best known for serious dramas, many of them loosely based on factual events and persons, Oliver Stone does occasionally make films that aim for nothing more than entertainment and visceral thrills. Early in his career, he wrote and directed a pair of horror films (SEIZURE and THE HAND), and he returned to genre filmmaking in the nineties with U-TURN and NATURAL BORN KILLERS. He heads back to genre territory once again in his latest film SAVAGES, based on the novel by Don Winslow, who also co-wrote the screenplay with Stone and Shane Salerno.

The film begins with a voice over by O (Blake Lively), who tells us that just because she's telling the story, that doesn't mean she'll be alive at the end. O explains that she is the kept woman of two pot dealers. Chon (Taylor Kitsch) is an Operation Desert Storm vet with a damaged psyche; Ben (Aaron Johnson) an the idealistic hippie type who wants to save the world. Not only are these two unlikely friends, they have no problem sharing the same woman. It is implied, though never really followed up on, that the two must love each other more than O in order to be happy with this arrangement.

Nonetheless, these three do appear to be happy, and why shouldn't they? Thanks to the seeds Chon brought back from Afghanistan and Ben's knowledge of botany, they have the best weed in the world. Business is booming, allowing them to live a life of luxury. Unfortunately, their product has also attracted the attention of a Mexican drug cartel headed by Elena Sanchez (Salma Hayek). When Chon and Ben refuse to partner with Sanchez, she has her henchman Lado (Benecio del Toro) kidnap O. Chon figures that even if they do what Elena asks, O will die anyway. So with the unwilling help of a corrupt DEA agent (John Travolta), Chon and Ben set about trying to get O back themselves.

The problem isn't with the plot, but with the execution. For starters, the incessant narration is almost completely unnecessary, often telling us things that are right up there on the screen. All it does is bring O front and center as the audience surrogate, which drives home just how uninteresting a character she is and how bland a performance Lively gives. Not that her two co-stars are anything to write home about, either. Kitsch gives yet another one-note performance here, although to be fair that's pretty much how the character is written, and Kitsch does at least hit that one note with more subtlety than he did in BATTLESHIP. Johnson fares the best of the three leads, both in terms of having a better written character and the actual performance itself, but his character is still far from being a compelling protagonist. At least the supporting cast is fun, with Travolta, Hayek, and del Toro all playing it a little campier than the leads.

The biggest problem with SAVAGES, though, is its complete lack of momentum. It's a ninety minute B movie stretched out to fit a 2 hour-plus running time. As if to underscore the point, the film engages in a bit of third act gimmickry that actually throws the picture into reverse. On top of that, despite the pulpy subject matter, lurid violence, and kinky sex, the film takes itself too seriously, and for that to work it needs to have more thematic weight. There's some attempt to show how the drug business will force even the altruistic hippies like Johnson and O to get their hands dirty, but it doesn't really follow through on that, and you get no sense that any of the characters have substantially changed in the end. 2 out of 4 stars.
Posted by Bob Ignizio at 12:00 AM