Prince of Swine (now on video)

[PRINCE OF SWINE is now available on home video.] 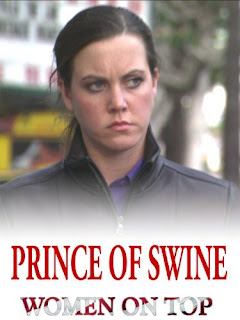 The thing about controversy is that it takes some amount of concerted effort, on the part of the public, to generate and sustain. Apologies if this review seems lazy - I just don’t want to risk fanning the few meager blazes that Mark Toma’s PRINCE OF SWINE has managed to spark up between admirably vigilant defenders of feminism and the smirking, priggish iconoclasts who goad them.

Movies marketed on the merits of sheer gloves-off un-PC-ness always send out the hot sodium stink of a warning flare: gloating, showboating wreck of a film ahead. So it goes with Toma’s budget-deprived and class-deficient comedic stinker about gender politics and the dishonesty of feminism.

Part courtroom drama, part anti-romantic comedy, SWINE is set in the dog-cannibalizing pigsty of C-list Hollywood, where Julie (Nell Rutledge), an idealistic lawyer, begs her new boss, Witt (Toma), to let her take on a  young actresses’ sexual harassment lawsuit against the grotesque Farber (John Klementaski) - one of the most influential and boorish television producers in the business.

The anti-romantic comedy aspect comes from the relationship between Julie and her boss, as the young lawyer repeatedly finds herself, against all better judgement, bedding her cynical superior. Meanwhile, the courtroom scenes give Toma and his character, Witt, plenty of space to wax polemic on the film’s primary conceit: the myth of gender equality.

Through a series of on-screen couplings and powerfully hammy dialogues, Toma lays out a half-broasted argument that starts with the enduringly childish conceit that all a feminist really needs is a thorough jackhammerin’, and ends with a heartfelt plea (in faux-arty montage form) for a transparent, honest world: Can’t we all just admit that women naturally use sex, and the withholding thereof, to extract desired goods and services from men... and that men instinctually seek power, a totemic masculine currency that can be exchanged for sex? And, while we’re at it,doesn't  feminism – a manipulative, misdirected power grab by the dishonest, the ugly and the naïve - just upset the balance by creating undesirable chicks and frustrated and, ultimately, emasculated, dudes?

In a back-handed gambit to ensure that the audience doesn’t mistake his supposed gritty honesty for, you know, actual blatant misogyny, Toma makes sure that Farber is as despicable as possible, dishing out shot after shot of the supposed entertainment magnate gleefully debasing aspiring actresses with sexual commands borne on threats of physical violence. Less shocking than they are yawningly gratuitous, the scenes only serve to highlight Toma’s fixation on degrading women into a state of willing humility.

The depth of this obsession is driven streaking over the fence by Julie’s arc, which finds the
intrepid, headstrong feminist having what’s presented as a near-holy epiphany as she
awakes from her apparently fantastical ideals of justice and equality into Toma’s jaded,
bitter and sexually carnivorous reality. Oh, the excessive use of the words “bitch” and
“whore” - particularly in a courtroom setting - is also more than a little revealing. (Also-also,
note the Tinsel Town setting and nihilistic [read: cliché] portrayal of the entertainment
industry. Could it be that Toma’s aggression toward women is a bit... displaced?)

Usually, I feel bad disparaging the hard-striving efforts of a burgeoning cinematic artist working outside the system. In this case, though, Toma not only cast himself in the film, but also made sure that his fictional alter-ego cornered the monopoly on sex scenes while simultaneously being unironically named “Witt” (I can only imagine the other monikers he considered... Klevar? Shmart?).
It always seems a little too convenient when a first-time filmmaker just happens to have a radically divisive opinion about low-hanging hot-button socio-cultural fruit. Whether Toma actually believes in the bloviating claptrap he’s hawking doesn’t really matter. What matters is how well he presents it. And I gotta say: if PRINCE OF SWINE really isn’t just a foot-stamping, throat-hoarsening plea for attention, it’s a real shame – that’s about the only level on which it works. (1 out 4 Stars)
Posted by Matt Finley at 12:00 AM