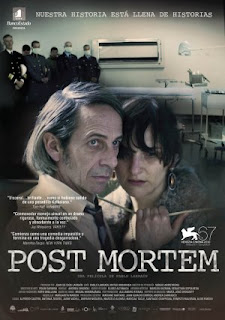 More than a few writers have referenced zombie cinema while discussing 2010 Chilean drama POST MORTEM. Though it may seem morbid and more than a little flippant to huck Romero references at a realist film that takes place amidst the horror of Augusto Pinochet’s brutal 1973 military coup and subsequent dictatorship, the observation is (excuse the pun) dead on.

Certainly, the comparison is obvious as it applies to the people of Chile who, as the movie progresses, are stripped of their morale and socio-political identity, and forced, under threat of death, to become mindless followers of the new regime. More pointedly, though, writer/director Pablo Larraín (TONY MANERO) uses a small story to take a macro view, posing the Chilean populace as cells of a national organism (a perfect analogy for the functioning socialism Chile had achieved) – an organism that is infected and, ultimately, destroyed from within, only to shamble on lifelessly under the dread command of the inciting malignancy.

Larraín certainly isn’t coy about his intentions. The film is called POST MORTEM, after all. The writer/director narratively pathologizes the corpse of Chile’s socialist democracy using a story in which the main character is a mortuary attendant whose job is to transcribe autopsies from doctors’ notes and dictation. Protagonist Mario (Alfredo Castro) is portrayed as both physically and emotionally sallow, eking out a humble existence from his transcription work as he pines after his neighbor, Nancy (Antonia Zeger), a cabaret dancer whose family, as fervent supporters of president Salvador Allende, is covertly assisting the resistance against General Pinochet and the Chilean army.

Whether out of denial or a simple, desperate loyalty to routine, neither Mario nor Nancy harbors any outward nationalism or political loyalties. Avoiding all engagement with the resistance, even as co-workers and family members passionately opine and futilely plan, Mario is a frustrating and shame-inducingly identifiable character. Eventually, Nancy’s family’s home is raided and Mario is conscripted by Pinochet’s army to transcribe a harrowingly significant autopsy. From here, the mortuary attendant’s passive cowardice simultaneously saves his life and seals his fate as the film shuffles eerily onward toward a brilliant, unrelenting conclusion that invokes Edgar Allen Poe by way of a just-post apocalypse.

Shot on 16mm to heighten the gritty reality of mid-coup Santiago, POST MORTEM wanders corpse-clogged hospital hallways and the tank-ravaged remnants of urban avenues, juxtaposing the languid pace of Mario’s everyday life with the head-spinning velocity of Pinochet’s uprising. Larraín still manages undeniable flashes of wicked, dark humor, often in demonstrating how needy, unconfident and unintentionally selfish Mario is. Eventually, though, the chuckles wear through – it’s these same traits that make so many of us ideal, unwitting foot soldiers of social and political tyranny.

Early in the film, a doctor, after expressing sympathy for the nude, brutalized female corpse beneath his scalpel, tells Mario to scratch the remark. Mario instead erases it, and is briefly chided for not following directions – there is, of course, a difference, and Larraín is asking us to reflect upon it. To scratch out minor, soulful truths and impassioned subjectives from the record is to use officially sanctioned means to nevertheless subvert the dishonest bureaucracy of history. To present the expected, unbiased product, complete with scrawling inky redactions that, through sheer force of half-visible honesty, sear through the scribble, proving that informed bias and emotional thought are hallmarks of humanity and its history alike. Erasing, then, is to deny that same humanity.

Larraín’s film is quick to argue that each practice has a time and place. It grapples with the idea that history is defined by the post mortem transcribers of events – those who give language to the purposely silent, the voiceless oppressed and the stone-tongued dead - and their decisions to scratch out or erase, to include in part, or omit in total. It also concedes that these transcribers are as lost and fallible as any of us.

POST MORTEM presents the autopsy of a lost country. It describes the slicing of the skin, echoes the sick crack of butterflied ribs and lays bare the final days of Chile’s socialist democracy. Its final meals. Its fatal wounds. It testifies in the name of citizens both living and dead - the vagrant cells wandering civil organs and domestic tissue, stumbling voiceless inside the collapse. (3 ½ out of 4 Stars)