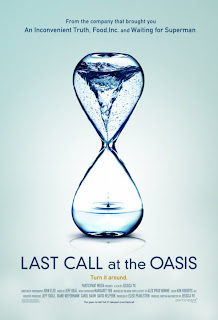 “Water, water everywhere, nor any drop to drink,” the accursed sailors' lament in “The Rime of the Ancient Mariner,” provides an apt synopsis of the problems addressed by Jessica Yu's exceptional documentary, LAST CALL AT THE OASIS.

Although the Earth is 70 percent water, 98 percent of it is saline, which can't be used for drinking or irrigation. And the world's freshwater supplies are increasingly threatened by climate change, population growth and toxic industrial contamination.

The situation is unsustainable; by 2025, it is predicted, half of the world population will not have access to water. Ismael Shageldin of the World Bank says in the film, “The wars of the 21st century will be fought over water.” (Later the film notes that in areas where water conflicts exist, such as Palestine, Jordan and Israel, which are dealing with the diminishing Jordan River, issues have been resolved through cooperation rather than war.)

The film, inspired by Alex Prud'Homme's book The Ripple Effect and produced by the company responsible for AN INCONVENIENT TRUTH, WAITING FOR SUPERMAN and FOOD, INC., thoroughly explores the issues of water, “the single most necessary element for any of us to sustain and live and thrive.” It is skillfully made, with breathtaking photography, well-chosen music and informative interviews with a diverse set of experts and activists. Environmental documentaries can be overly polemical, alarmist or didactic, but Yu, a writer, director and producer of long experience, avoids these pitfalls. The film is educational, balanced, inspiring and, true to its subject, not the least bit dry.

The well-known environmental activist Erin Brockovich is featured in the film, battling fiercely on behalf of a community in Midland, Texas (childhood home of George W. Bush), whose residents are afflicted by high rates of cancer connected with well water polluted with an industrial contaminant called hexavalent chromium. A woman at a town meeting led by Brockovich says she's a hairdresser who relocated from Arizona. “I've shaved more heads here," she says darkly, "than in I ever did in Mesa.” The politics of the situation are sobering. The Clean Water Act, frequently violated, is scant protection for these people; under something called The Halliburton Loophole (after Dick Cheney's company), oil and gas fracking companies are exempt. Brockovich, who takes the fight to Senate Committee hearings, tells the townspeople, “I'm not going to lie to you. Superman is not coming.” Brockovich – even more formidable than Julia Roberts' Hollywood portrayal of her suggested – laments the ineffectual Environmental Protection Agency, which she describes as “understaffed, overburdened and broke.” Brockovich recently wrote in the Huffington Post, “The issue [of clean water] is more relevant and more daunting today than when I began my work in 1991.”

Environmental activism tends not to win many friends. A courageous, white-haired woman who risks her own lung health to sample and monitor the contaminants in local water from industrial farm manure, has received death threats, dead animals in her mailbox, and gunshots through her two-year-old granddaughter's bedroom window. Ultimately her efforts earn her the Goldman Prize for excellence in protecting the environment, and her first-ever airplane trip to accept it.
Yu also calls upon water experts Peter Gleick, Jay Famiglietti and Robert Glennon and examines the pros and cons of various proposed solutions. The film discusses the ironies of the mad growth of bottled water consumption – $11 billion worth  – which converts a public resource into a private commodity. People with unlimited access to free water chug away at plastic water bottles while millions are left without access to drinking water. It is noted that bottled water is regulated by the FDA, not the EPA, and lab analyses show it can be contaminated with everything from crickets to glass particles.

Recycling used water is one proposed solution, however distasteful it sounds. Singapore has experimented successfully with something it calls “Newater,” which is basically recycled, purified waste water. The film tasks a team of marketing experts with overcoming the “yuck factor” and making recycled toilet water palatable to the public. The team comes up with the jocular product name “Porcelain Springs” and the tag line, “From the most peaceful place on earth.” Amusingly, they engage comic actor Jack Black as its commercial spokesman; after some hesitation, Black chugs down the sanitized toilet water and leaps in the air with joy. People on the street, asked to try the product, mostly turn away in disgust.

The film's breadth and scholarship are impressive, and its message is ultimately optimistic, offering solutions and hope amid the dire forecasts. Anyone interested in the future health and survival of the planet, and its wasteful, greedy but often courageous and ingenious human stewards, should take notice. 4 out of 4 stars.