I Wish (July 20th and 21st at the Cleveland Cinematheque) 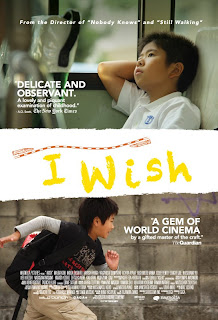 As the Rolling Stones sang, you can't always get what you want. But if you try, sometimes you get what you need. That's the lesson the kids in I WISH learn when they embark on a journey to ask the gods of public transportation for miracles, believing that at the moment when the two lines of the new bullet train cross paths, wishes will be granted. One wants to marry his teacher, another seeks success in her acting career, and one just wants his recently deceased pet to live again. Koichi (Koki Maeda), the instigator of this quest, wants the volcano that watches ominously over his home town to erupt. He figures that way, he and his mother will be forced to move back to the city where his younger brother Ryunosuke (Oshiro Maeda, Koki's real life brother) lives with their irresponsible musician father, thus reuniting the family.


The young actors here all give excellent unaffected performances, cute and likable for the most part, but never cloyingly sweet. Kids may be innocent, but writer/director Hirokazu Koreeda knows they can also be unaware or uncaring as to the potential ramifications of their actions and desires. As the characters reach the end of their journey, it's no so much about whether their wishes will be granted, but whether they will gain the insight and maturity necessary to move forward into adulthood. The adult performers do fine work as well, but they rightly remain in the background for most of the film, sometimes helping the kids, sometimes hindering, but never taking the spotlight away from them.

I WISH is low key film with a relatively minimal plot. It moves at a leisurely pace, at times meandering down seemingly irrelevant side roads or flat out stopping to linger on an arresting visual or emotional beat. Taking the scenic route allows one to notice things that would just go whizzing by at bullet train speeds, but there are times when Koreeda goes wandering longer and farther afield than he perhaps should. Regardless, it's a fine film, and there are less pleasant detours one could take. 3 1/2 out of 4 stars.