Here (July 12th and 15th at the Cleveland Cinematheque) 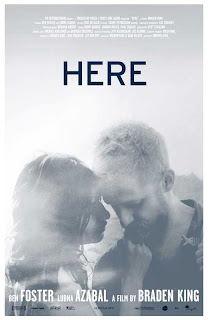 If one were to reduce HERE to nothing more than its plot, it wouldn't be all that different than your average Nicholas Sparks adaptation, or perhaps more generously, something like THE BRIDGES OF MADISION COUNTY. Will (Ben Foster) is a cartographer sent to Armenia to improve the satellite maps of the region. It means a lot of long hours alone, but that suits Will just fine, at least until he meets Gadarine (Lubna Azabal) at his hotel. Gadarine is a loner as well. She was born in Armenia, but left to attend school in France and ultimately begin a successful career as a photographer. After a chance meeting, the two hit it off and decide to travel together, each “mapping” the terrain in their own way – Ben with his precise measurements, and Gabardine with her more emotional and artistic photos. Along the way they fall in love, have adventures, and inevitably argue as their two very different worlds come into conflict.


Foster and Azabal give understated and convincing performances as intelligent adults who we believe might actually fall for each other. Their is allowed to build slowly, with the film taking time to develop their characters and let their attraction grow naturally. There are no contrived misunderstandings getting in the way of their happiness, but rather the type of real issues that probably would come up between these characters, even if the one big argument between them does get overplayed a bit.

Writer/director Braden King uses this somewhat pedestrian love story as a way to get at his central theme: Though we may all live in the same world, we all see and experience it differently, and no two maps or models of that world would look the same. Not only is this inherent in the romance between the two leads, but we also see it illustrated in the relationship between Gabardine and her parents. Gabardine's mother is happy for her, even if she doesn't entirely understand what her daughter does. However, her father, who worked as a janitor to send Gabardine to school, can't accept her success because according to his “map”, what she does isn't real work.

These themes are further emphasized through King's visual style, in particular the chapter breaks consisting of short bursts of experimental visuals overlaid with narration by Peter Coyote. It's a device that's right on the edge between poetic and pretentious. It all feels a little too on the nose, but at least some credit is due King for taking the artistic risk.

Uneven though it may be, HERE is still an smart and entertaining romantic drama. Its aspirations to be something more than just that may not entirely hit the mark, but neither do they miss it by that much. 3 out of 4 stars.
Posted by Bob Ignizio at 12:01 AM