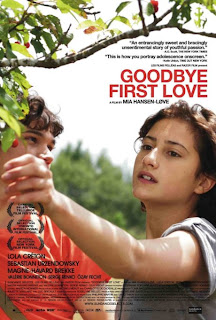 All the passion and immaturity, unrealistic expectations and foolish vows of a young first love are depicted with a keen and knowing eye in Mia Hansen-Løve's GOODBYE FIRST LOVE. It's 1999 and Camille (Lola Creton) is a fifteen year old beauty who is already certain she wants to spend the rest of her life with Sullivan (Sebastian Urzendowsky). That Sullivan often neglects his girlfriend to hang out with the guys and is often insensitive and immature is probably about par for the course for teenage boys, and Camille isn't exactly what you'd call a self actualized person at this stage of her life, either. So when Sullivan leaves for a 10 month trip through South America, it's not much of a surprise that the relationship doesn't survive.

Camille still holds on to the memory of that first love, though, finding it difficult to get past her nostalgia and get on with her life. Eventually we see that she does as the movie jumps ahead to her college years studying to be an architect, finding both herself and a new love (Magne-Håvard Brekke) along the way. Still, the memory of that first romance refuses to fade. When Camille and Sullivan cross paths again, the sparks between them reignite, even though Camille has grown considerably while Sullivan still seems like the same immature, insensitive guy he was as a teenager. No one ever said passion was logical.

While the movie is by no means hard to follow from a narrative standpoint, there is less a plot here than a series of vignettes. The focus isn't on the suspense that comes from the possibility of an illicit affair being found out – in fact, that barely seems to rate as a concern for Camille. Rather this is a movie about the power of an old flame to keep drawing one back like a moth, and the goal of GOODBYE FIRST LOVE is to capture the emotional and mental state that accompanies that pull. In that respect it succeeds remarkably well. 4 out of 4 stars.