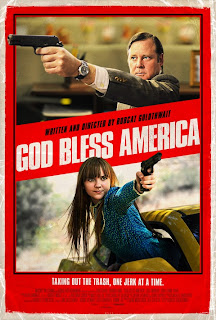 Mike Judge's 2006 film IDIOCRACY predicted that humanity would devolve to the point that comedy would be reduced to jokes about getting hit in the balls, the notion that sex sells would have come to its logical conclusion of fast food prostitution, the President of the United States would be an ex porn star, and the already stupid masses would be kept from even the most basic thoughts by arena fights to the death pitting man against monster truck. According to Judge's concept, all this was a good 500 years away. In GOD BLESS AMERICA, Bob Goldthwait seems to be saying Judge was an optimist. American culture has already fallen so far with morning shock jocks, spoiled teen reality shows, arrogant right-wing talk show hosts, and “talent” programs that simultaneously mock and celebrate their worst would-be contestants that it sometimes seems we could find ourselves living in Judge's dystopia within the decade.

The protagonist of GOD BLESS AMERICA is Frank (Joel Murray), a middle aged working class stiff who suffers from severe migraines who still believes in basic notions of decency and politeness even if no one else around him does. One particularly bad day Frank gets fired from his job after being falsely accused of sexual harrassment, then learns from his doctor that the severe migraines he's been experiencing are due to a brain tumor that will most likely be fatal. Frank goes home and contemplates suicide, but instead decides to go on a killing spree to eliminate people he believes deserve it, thus doing something useful with his remaining time on earth. Comedy ensues.

After Frank's first kill, teenage Roxy (Tara Lynne Barr) inserts herself into his life as his accomplice. While Frank tries to pick his victims carefully, if Roxy had her way every person who was even mildly annoying would be put on the hit list. As time goes on, the two bond (although not romantically), and ironic as it may seem, Frank's influence serves to temper Roxy somewhat. The relationship between these two is similar to that between Rain Wilson's hapless would-be superhero and Ellen Page as his sidekick in SUPER, but handled in a more believable, complex manner.

For some, GOD BLESS AMERICA will be clever, cathartic satire. Others, even if they happen to be sympathetic to Frank's frustrations, will feel that the violent humor goes too far, and is perhaps even hypocritical in a film that rails against the coarseness of modern culture. There will also be plenty who just don't get it, because as far as they're concerned American Idol is the height of quality entertainment, and when Frank and his teenage sidekick take out a row of moviegoers for texting and talking during the feature, they'll probably be thinking, “what's are they so mad for? I do that all the time.”

The main problem with the film is that, despite some good scenes and excellent performances by Murray and Barr, it's less an actual movie and more writer/director Goldthwait screaming to the world about all the things he hates. Frank delivers a lot of rants and monologues that, while entertaining, feel too much like manifestoes rather than dialogue. In addition, the film just feels kind of clunky, never really finding its groove. Still, a comedy this vicious that still manages to be funny most of the time is rare enough that one is inclined to overlook its shortcomings, at least if they happen to hate the same things Goldthwait hates. 2 1/2 out of 4 stars.
Posted by Bob Ignizio at 12:01 AM