[CHILDREN OF PARADISE screens Sunday July 22nd at 10:00 am at the Cedar Lee Theatre and Tuesday July 24th at 7:00 pm at the Capitol Theatre.] 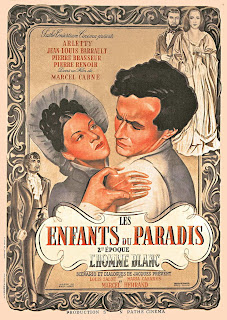 It's French, it's over 3 hours long, and it has mimes, but don't let that stop you from seeing this beautifully restored version of CHILDREN OF PARADISE, one of the true classics of world cinema. This 1945 film was made under near impossible conditions during the Nazi occupation of France. For starters, two of the key production personel were Jewish, which wouldn't have sat too well with der Fuhrer had their involvement not been kept secret. Even the running time of CHILDREN would have gotten it banned, as no films over 90 minutes were allowed. Director Marcel Carné got around this by claiming he was making two separate movies, gambling that by the time he was done, the war would be over, the Nazis would be gone, and he would be able to release the film as he intended it. The bet paid off. Not only did Carné get to release his movie his way, it became a huge success. Eventually it was voted the best film of all time in a poll of 600 French critics in 1995.

CHILDREN OF PARADISE is a melodrama set in the world of the theater in early nineteenth century France in which all the characters, actors and non-actors alike, are playing roles onstage and off. The plot revolves around sexy older woman Garance (Arletty) and the four men who pursue her: amoral criminal Lacenaire (Marcel Herrand), Shakespearian actor Frédérick Lemaître (Pierre Brasseur), the mime Baptiste (Jean-Louis Barrault), and rich nobleman Comte Édouard de Montray (Louis Salou). There's also another woman; Nathalie (María Casarès), an actress in love with Baptiste who believes they are fated to be together despite his insistence that he just wants to be friends.

Garance is completely upfront about not loving any of the men, admitting only to liking all of them and feeling no shame in enjoying the company of whomever best suits her needs at the moment. That state of affairs suits most of the men just fine, but Baptiste is truly, hopelessly smitten. Eventually, though, Garance's happy go lucky lifestyle seems destined to lead to a bad end, and the other members of this love hexagon aren't likely to fare much better.

While CHILDREN does admittedly feel dated, that's mitigated to a large degree by the aura of the fantastic that permeates the film, as well as its setting and themes. This is a movie about artifice and performance, after all, so if the acting techniques of the day call attention to themselves more now than they would have when it was made, it still works. The dialog is witty and memorable (a favorite line, spoken by Lacenaire: “I'll walk with my head held high until it drops into the basket.”), the performances first rate, and the sets and production values would still be impressive even without knowing the difficulties under which the film was made. 4 out of 4 stars.
Posted by Bob Ignizio at 12:00 AM